Includes 160 point quality check and roadworthy Don't Miss Out, Call Us Today, or Leave Your Details and We Will Call You. Finance Can Be Arranged, Nationwide Delivery, Trade-ins Welcome, Spare Keys, Full Service History At Agents. price Excludes Documentation and Registration Costs E&OE As one of the many Imperial Ford Pre-owned dealerships, we pride ourselves in excellent service and offer vehicles that can be trusted and enjoyed. Customer satisfaction is our main priority! Motus Ford.

Please note: The buyers guide might be a different variant from the car being viewed.
999285127 The first two generations captured the hearts of local buyers. Will the new Picanto repeat this feat?

Where do you draw the line between a totally new vehicle and a substantial facelift? The Picanto, Kia’s latest addition to the South African market, is a case in point. Kia calls it a new-generation model and, certainly from a design point of view, it is exactly that with a nose, tail and every single body panel different to its predecessor. With a larger tiger-nose grille, angular front bumper and sharper headlamp design, Kia design guru Peter Schreyer has given the Picanto a more aggressive appearance. That said, changes to the rear lamp and bumper design deviate less from those of the previous model.

Under the skin, though, the changes are minor. The Picanto shares its platform and engine line-up with the outgoing model. Therefore, at first glance, all the new car appears to offer is a fresh exterior/interior design and an improved specification level. Well, not quite. For one thing, 44% of the new Picanto’s body is now composed of Advanced High Strength Steel (AHSS) that, promises Kia, makes it far more rigid. With a static torsional stiffness increase of 32%, it is safer, too. Then there are the changes to its dimensions. Despite being based on the previous car’s platform, Kia has fettled the measurements and, while it may be the same length as the previous car, the wheelbase and rear overhang have increased by 15 mm and 10 mm respectively, while the front overhang has been shortened by 25 mm. It’s also 5 mm taller, with ground clearance decreased by 11 mm. Inside, the dashboard has been raised by 15 mm to offer more kneeroom.

Our measurements indicate that these alterations reflect an increased amount of interior space, with front headroom up by a whopping 81 mm, while the boot benefits from an extra 32 litres. These figures are not class-leading, but they’re certainly not far off. This top-of-the-range Smart model is also impressively specced, and in the cabin you’ll find such luxuries as a new seven-inch touchscreen infotainment system with MirrorLink functionalities and a rear-view camera display (unfortunately, only on the Smart variant), a leather-wrapped multifunction steering wheel, gear knob and armrest, and aluminium pedals. It boasts projector headlamps, as well as LED daytime-running lights and taillamps, plus a set of 15-inch alloy wheels; all features relatively rare in an A-segment hatch. You do, however, pay for them and this Picanto has a near-R200 000 price-tag, which is a R12 000 increase over the 1,2 EX. A two-year/30 000 km service plan costs R3 952,59, but a class-leading warranty is standard.

No doubt Kia is catering for the buying-down trend currently cascading through all vehicle segments and has specced this model to catch those who might have previously been looking at a more basic B-segment option. These additions do go a long way to making the Picanto feel upmarket and refined, but at this price point, the Kia is fighting with the likes of the Volkswagen Up! and Fiat 500 0,9 TwinAir, contenders that also offer impressive refinement with an upmarket presence. As mentioned in our three-way comparative test against the Suzuki Celerio 1,0 GA and Hyundai i10 1,1 Motion, a major concern we had with the previous Picanto was its lack of safety features for the base models, particularly the omission of ABS. The new car goes some way to remedying this and, whereas the base Start model still has no ABS and only a single airbag, the rest of the range does adopt this crucial safety braking system.

Still missing, however, are segment essentials such as traction and electronic stability control, all features we think are important in modern traffic conditions and should be available at this price point on a new vehicle. This is something that has affected the Picanto’s Euro NCAP results and the standard model was rewarded three stars. In other international markets, the Picanto can be fitted with a safety pack that includes active emergency braking and ESC with torque vectoring. This model was tested separately by Euro NCAP and earned a four-star rating.

As mentioned before, the Picanto carries over its powertrain from the previous generation and, like the recently launched, new-generation Rio’s powerplant, the Picanto’s naturally aspirated 1,2-litre four-cylinder Kappa engine loses some power (4 kW) but gains torque (2 N.m). Despite Kia claiming the new Picanto is 23 kg lighter, our test model shows it to be 25 kg heavier than the 1,2 EX model we tested in our December 2011 issue.

But it’s a minor difference that has no effect on performance. In fact, this test unit was quicker than that 1,2 EX, registering a 0-100 km/h time of 11,45 seconds. Not only does this better the previous model we tested by 1,33 seconds, it’s also 0,55 seconds faster than Kia’s claim. This new Picanto also posted notably improved in-gear acceleration figures. This could be attributed to the fact that the final drive is shorter than before, and that goes some way to explaining the 11,68-second improvement from 120 to 140 km/h in top gear. Fitted with ABS and larger front brake discs, the Picanto delivered a commendable braking performance, with an average 100-0 km/h time of 2,95 seconds – and this is despite being fitted with fuel-saving, less grippy Kumho EcoWing tyres.

Adding a little extra dynamism to the Picanto’s handling is the revised, electrically assisted steering, which now is more direct, together with front and rear anti-roll bars that have been stiffened by 2 and 5%, respectively. On the road, the Picanto feels sharper and more responsive than before, especially at lower speeds. The steering system, gear shifter and pedals are fluid in their actions, adding a certain fun factor to this A-segment hatch, although those tyres do start protesting early. They’re also quite rowdy at highway speeds. The upside of these tyres, though, is that, along with the recalibrated engine, the Picanto improved on its consumption figure on our fuel route, registering 5,3 L/100 km (very close to the Volkswagen Up!’s figure of 5,1 L/100 km). That bests our fuel-index figure of 6,0 L/100 km.

More Cars from this Dealer Enquire
Call Dealer
Call Me Back
-
Similar Cars for Sale 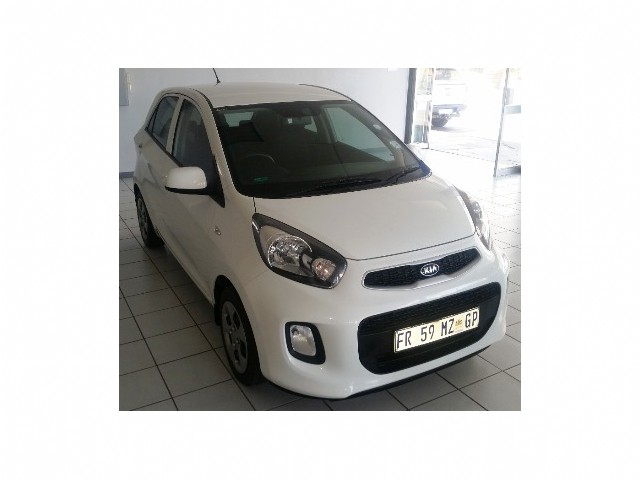