Please note: The buyers guide might be a different variant from the car being viewed.
999269401 Is a subtle nip and tuck enough to keep the Cerato relevant in one of the market’s toughest segments?

You would be forgiven for not realising the Kia Cerato had recently undergone a facelift. The changes are that subtle. Updates in other markets included a new trim line and seven-speed dual-clutch transmission, but here in South Africa, the compact hatch merely makes do with an updated “tiger nose” grille. And that’s basically it; everything else remains the same.

Why the test, then? Well, in our March 2014 issue we pitted the Cerato 1,6 EX sedan against the Toyota Corolla 1,6 Prestige and Hyundai Elantra 1,6 Premium, but we had yet to subject a hatch version to our rigorous road-test procedures. Given how competitive the compact-hatchback market is, it remains a very relevant test. In that 2014 shootout, the Kia was deemed the victor, but only just. Its sporty nature, competitive pricing and the added security of six airbags contributed to its victory on that occasion, but since then, a lot has changed and most of that involves the weakening of our currency. And that means the Cerato range is now significantly more expensive.

It’s not an ideal situation for the Korean, as there are elements in the Cerato that have begun to show signs of age. The dot-matrix LCD infotainment screen is one – though it does remain pleasantly functional – but the climate controls and other switches feel modern and solid to the touch. Overall, the design comes across as clean and the switches and dials are neatly placed. The necessities are all there as well, and safety features include the aforementioned six airbags and Isofix on the outer rear seats.

A centre armrest, rear air ventilation, multifunction steering wheel and cruise control are all specced as standard, while exterior features include LED daytime running lights, foglamps and 16-inch alloy wheels. As a hatchback, the boot space is a commendable 256 dm3 and that’s with a full-sized alloy spare under the floor. Utility space, however, is less voluminous, offering just 960 dm3, a figure that is significantly less than other hatches in this segment. Rear legroom is similarly compromised, but headroom both front and rear are in line with the measurements of its competitors. While you might assume a shorter wheelbase could be behind this packaging shortfall, the Cerato’s 2 700 mm dimensions indicate that it is, in fact, slightly longer than the competition.

Having this slightly longer wheelbase does, however, help to give the Cerato’s a composed and refined ride quality. The well-sprung chassis is hampered only by the Nexen N Blue HD tyres that tend to transmit road noise into the cabin. These tyres, when mated to the front ventilated and rear solid disc brakes, also reflected a set of peculiar 100-0 km/h braking times. During our 10-stop emergency braking tests, we recorded times of 3,4 seconds on more than one occasion, thus bringing the average braking time up to 3,17 seconds. That, however, is still an acceptable figure.

The naturally aspirated 1,6-litre four-cylinder Kappa engine with its six-speed manual transmission remains as the driving force under the Cerato’s hood (supplemented with a 2,0-litre petrol option). Despite the technology being relatively old, it’s still able to match the third to sixth in-gear acceleration figures of both the outgoing Volkswagen Golf 1,2 TSI and Ford Focus 1,0 EcoBoost; impressive for a car with about 10% less torque than the two Europeans.

The Cerato’s power figure of 95 kW, however, is higher than its turbocharged competitors, which is where it compensates for its low torque. The 0-100 km/h acceleration time of 11,09 seconds is also par for the course in this segment. On the road, though, the gears do seem uncomfortably short, with sixth gear revving above 3 000 r/min at 120 km/h. This means there’s a constant drone of engine noise permeating the otherwise superbly insulated cabin.

Never its strongest feature, the Cerato’s electrically powered steering wheel is still characterised by a distinct lack of feedback, particularly at speed. In parking situations, however, it is a welcome addition, making it easy to twirl the wheel round. Higher-specced trim levels come with the Flex Steer system that has user-selectable load settings. Manual Kia Cerato for sale by Chat2Cars in South Africa. 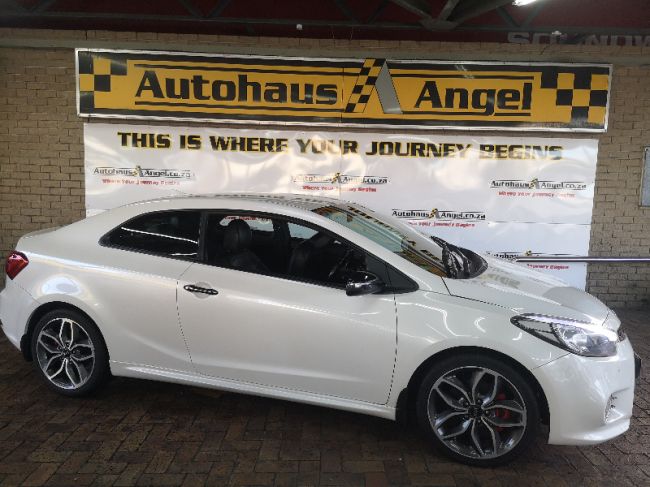