<p>This Pristine condition low mileage 2008 Hyundai Getz 1.4 is an all round family Hatchback, fitted with awesome convenience, comfort and safety features to guarantee a pleasurable journey every-time. with a beautiful cloth interior complimented by the very smartly designed dashboard and the gorgeous exterior lines. The 2008 Hyundai Getz 1.4 is just incredible in everyway. economical fuel consumption, spacious, reliable and most importantly, affordable. Feel free to pop in for a test drive, and finance with all the major banks.

Please note: The buyers guide might be a different variant from the car being viewed.
151153

It released the revamped and improved Elantra in 2001, followed by the Matrix in 2002, and now plans to introduce the redesigned, sexy Tiburon and the new ‘Mercedes look-alike’ Sonata.

Getz is a catchy name for a rather fetching car, which stands fairly tall in the latest ‘mini MPV’ fashion, allowing good visibility from an airy cabin with decent headroom. Styling is angular, a bold step when others such as the Citroen C3 and Renault Clio have opted for gentle curves, but the result is very neat. It stands out from the rest, and looks cute while still maintaining mildly aggressive overtones, with a strong crease line down each side for added muscle.

Fortunately, this is not as overdone as the (outgoing) Tiburon model. Bumpers are colour coded and incorporate black plastic strips to ward off scratches. These are continued along the sides of the car and also serve to visually break the expanse of painted metal. Steel wheels with silver trim covers complete the picture and, since these are not too exciting in appearance, aftermarket alloy wheels will probably appeal to many purchasers.

Gone are the days when Korean cars were sold with a full complement of bells and whistles thrown in. The latest policy from Hyundai appears to allow the customer to decide on the level of equipment desired by making available a basic spec model as tested here Ð priced, incidentally, at R109 995. This has power steering, electric windows, front fog lamps and remote central locking as standard features with the option of air-conditioning (R5 999) and a radio/CD player (R1 750). For more goodies, there is an HS model (appropriately standing for high spec), which has the audio system and the air-conditioning and adds the following: dual airbags, electric mirrors, and colour-coded door handles and side mirrors.

Seemingly simple items such as air vents can reveal something about the manufacturer’s commitment to providing a quality product. In this case, Hyundai has succeeded, since these are not far off Volkswagen’s standard of fit and finish. The impression of quality extends to the switchgear and ventilation controls and, in general, the panel fit, shut lines and paintwork are exemplary. The facia is finished in two-tone grey, darker above and lighter for the lower panels, with an embossed texture that looks respectable for a non-laminated moulding and does not exhibit the shiny appearance of some cheaper plastics.

Seats are also trimmed in two-tone grey and are quite acceptable from a comfort point of view, although taller drivers would benefit from more legroom. The assortment of oddment storage areas are worth describing. Firstly, one of the most important ‘new’ car inventions Ð cupholders! A pair is situated ahead of the gearlever, and one houses a removable ashtray. Another, larger one is placed at the rear of the console, where it can be used by rear seat passengers. It is large enough to take a 750 ml bottle.

The front seat occupants have door pockets with see-through capability via holes in the moulded plastic. A shallow but useful shelf is provided under the steering wheel, where small items can be stowed by the driver, another slot under the audio unit is handy for pens, wallets etc and has a rubber mat for grip, while yet another slot is next to the handbrake.

A small, easily overlooked feature is a pocket stitched into the right hand side of the front passenger’s seat backrest, useful for holding pens, cards and the like Ð very neat. Seating in the rear provides decent leg- and kneeroom, more than some of its main rivals, with excellent headroom and good visibility. Two rear headrests are provided together with three seatbelts (the centre one a lap belt). The rear seat space comes at a price, with the luggage capacity only 192 dm3, slightly less than the main competition. On the other hand, the utility space available, measured at 952 dm3, is better than most.

After folding the rear seat backrests down (headrests need not be removed), the rear seat tumbles forward by simply pulling one strap. An instruction sticker showing the sequence of operations is amusingly titled ‘the way the seat works’. Although the lack of features on the standard model can be accepted at this price level, a few omissions did surprise us somewhat. One of these was the lack of a vanity mirror on the front passenger visor, while a more ‘glaring’ omission was the lack of dipping facility for the interior rear-view mirror.

If saving a few Rands was so important, Hyundai should rather have omitted the storage pockets in the front seat backrests, or the sunglasses holder situated above the driver’s head. Instrumentation is neat but basic, with no rev counter. There is stylish aluminium trimming around the dials, and a digital odometer.

Performance from the ‘Alpha’ engine was impressive. It is torquey, smooth and reasonably willing to rev, not too noisy either. In fact, sound levels were respectably subdued and point towards improved design effort in the NVH department.

Ride quality is excellent for a small car, and it soaked up bumps and damaged road surfaces with ease. This makes for a relaxing ride, but does have a downside in that, if one accelerates through a corner, the body exhibits a disquieting degree of lean, and understeer is pronounced. It is often necessary to back off on the throttle in order to bring the front end back into shape. This is accomplished easily, often merely by instinct as, when one panics, the immediate reaction is to leave the accelerator and think seriously about braking, by which time the car has returned to neutral steering.

This will seldom pose a problem in normal driving, as the objective of this runabout is to commute and convey, not to challenge hot hatches. Having said this, the 77 kW engine gives brisk acceleration, accomplishing the 0-100 km/h sprint in 11,77 seconds. More important for everyday commuting, the in-gear acceleration is impressive, with third and forth gears providing healthy get-up-and-go, while the fifth ratio is more of an overdrive, providing restful cruising attributes. Manual Hyundai Getz for sale by Chat2Cars in South Africa. 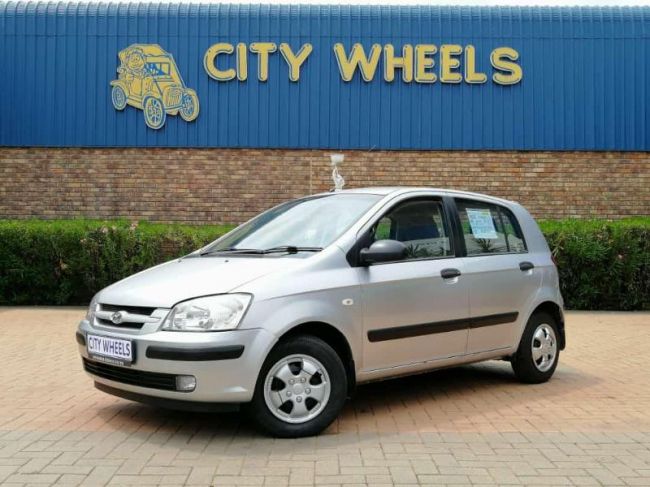