2010 Audi A4 For Sale in Gauteng, Johannesburg

Please note: The buyers guide might be a different variant from the car being viewed.
210262

THE extensive utilisation of its award-winning turbocharged 2,0-litre four-cylinder petrol powerplant has served the VW Group’s brands well – either to create performance-oriented compacts or mid-range all-rounder models in higher ranges.

In fact, the combination of the powerplant with a dual-clutch transmission (known as S tronic in the Audi stable) has benefited Ingolstadt’s A3 and TT ranges in particular. So, when the package is further enhanced with an allwheel drivetrain and applied to the A4 compact executive range, the result is a sporty four-cylinder that competes in a segment otherwise dominated by sixcylinder models.

Adorned with eye-catching 18-inch five-spoke rims and aluminium window trim as standard, the test unit certainly struck a more purposeful pose than its elegant, but rather understated, A4 brethren. Testers remarked that the LED detailing in the headlamps and tail-lights looked handsome and the pearlescenttype Aruba blue exterior finish certainly gave the now-familiar lines of the largish saloon substantial kerb-side presence.

The interior of the Audi A4, which is smartly trimmed in black Milano leather with aluminium trim inserts, remains one of the best in the segment in terms of fit and finish and user-friendliness. The electronic parking brake lever and optional adaptive damping (R14 090) control console (with Comfort, Auto and Dynamic modes selectable by a pair of arrow keys) are ergonomically efficient and all of the testers agreed that the attractive facia layout is arguably class-leading.

With a wide range of adjustment for the supportive front seats, there is a fine balance between sportiness and comfort. Cruise control, automatic lights and a rain sensor, plus the handy front centre armrest, are all standard features, as one might expect at this price level. Good rear legroom gained the approval of members of the test team, as did the folding rear seat, which increases the already capacious boot’s capacity from 376 to 1 032 dm3.

In truth, there was never much doubt about the outstanding qualities of the A4’s interior. However, apart from the dynamic ability so brilliantly demonstrated by the S4 flagship (tested in the November 2009 issue), we’ve been a trifle underwhelmed by the handling prowess of lesser A4 models. This test unit certainly went some way to address our criticisms and drew comments ranging from “a nice package all-round” and “a nice car to drive fast”.

With a kerb weight of 1 672 kg, the peak power and torque outputs produced by the latest generation 2,0-litre turbocharged FSI engine could only ever produce brisk, rather than swift, performance. Yet the powerplant feels unburstable and eager and the seven-speed dual-clutch transmission delivers crisp upshifts and gruff throttle-blipaccompanied downshifts. It’s a tribute to the engine and transmission management that the S tronic’s performance remains flexible enough to cope with a variety of driving conditions.

Some testers remarked that sudden changes of throttle input by the driver “could confuse the ‘box” as to when it should execute ratio changes, but in Sport mode the transmission responds promptly to shift paddle inputs and holds on to gears as required. There was overall agreement that (as opposed to the A4’s Multitronic continuously variable transmission) the S tronic has to be the default choice for driving enthusiasts, especially as it offers a manual mode at a flick of the wrist.

Aided by fatter-than-average tyres, there was little to fault the road manners of the test unit. Safety-first understeer will still be provoked in extremis, but at least the steering feel has been firmed up and turn-in remains as accurate as before. The ride quality is compliant, especially in comfort mode, but even when hustled along – or stopped in haste – the Quattro S tronic seems composed.

In fact, overall on-road refinement seems to belie the performance capability – although the engine can sound a mite strained with aggressive throttle usage.

In terms of the Audi A4 range, we’d suggest it does… but at a price that pits it against strong opposition from bigger-engined rivals.

Just how necessary all-wheel drive capability – and the price premium it demands – should be for a model such as the S tronic version of the 2,0 TFSI is a moot point, but it’s a compelling package nonetheless. Automatic Audi A4 for sale by Chat2Cars in South Africa. 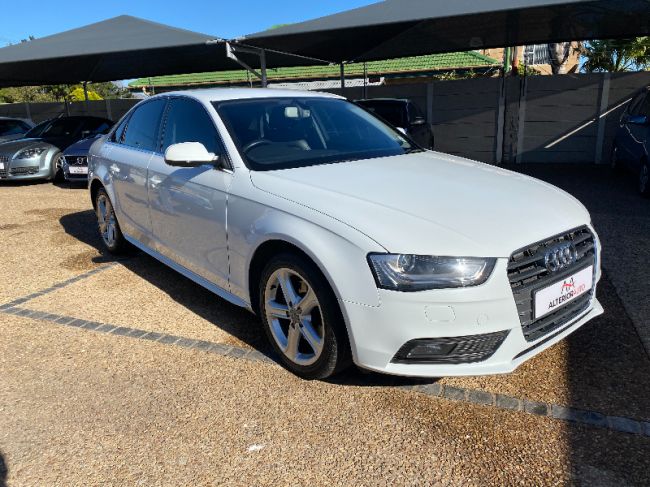