Please note: The buyers guide might be a different variant from the car being viewed.
236616

Generally, men and women tend to look for different things when purchasing a vehicle. After doing some research, Daihatsu has come up with what it claims to be the perfect car for women – the Terios Diva. But, is it really? We had it on test for two weeks to find out.

The modern-day definition of a diva is a woman who’s stylish, confident and influential. Honestly, driving around in the Terios Diva this weekend made me feel none of the above. Let’s start from the outside and move in.

This particular Diva comes with orange decals all over the exterior. On the bonnet there’s a large swirly artwork, while on the side and at the back “Diva” is printed. It hardly made me feel like I was getting some R-E-S-P-E-C-T. In fact, I’m sure people point and laugh. The decals are vinyl and looks as though I had them put on. A corner of one of the decals was lifting and if anyone had tugged on it, it would surely have come off. In case it does come off and you need to be reminded that you’re driving a Diva, the name has been stitched into the leather seats.

I like that Daihatsu has added spec to this vehicle to make it more appealing, but I don’t think I’ll ever need the heel protecting carpets because I try to never drive with heels. And most of the women that I know don’t wear heels while driving. The company claims that this is a result of a survey done among current female Terios owners. To each his (her?) own, I guess. Other features that are unique to this model include chromed interior door handles, tilt adjustable steering, driver seat height adjustment, seat back pockets, height adjustable seatbelt anchorage, air-conditioning, power steering, power windows all around, electric mirrors and no fewer than six cupholders.

The music system is definitely to my tastes with DVD/CD/MP3 playback, Bluetooth, USB and iPod functionality. There is also a GPS system, reverse camera and hard drive that can store up to 60 songs. The music system interface is touchscreen and I found that the buttons on the screen are too small and that when it’s bright outside, there’s a glare and it’s difficult to read. Another gripe I had is that the reverse camera sits very low (under the spare wheel cover). I prefer a higher vantage point.

Under the bonnet of the Diva is a 1,5-litre petrol engine with 77 kW of power and 140 N.m of torque coupled with a five-speed manual gearbox. The engine is a little unrefined and gear changes aren’t as slick as I would like them to be. Also, I often found myself wanting a sixth gear when travelling on the highway. The engine sounds as though it’s labouring. Also, once the car is switched off, there’s a pinging noise. I noticed this on some Toyota vehicles, too. The power steering and large turning circle of the Terios made parking and U-turn manoeuvres a breeze.

Women with babies will appreciate the long rear seatbelts. I know it’s an odd thing to highlight, but I’ve spent a good deal of the past three months strapping a baby seat into various vehicles and have found that some cars that have been in our fleet can’t accommodate some baby seats because of short seatbelts. For those with Isofix-compatible baby seats, the Terios Diva has anchorage points.

On the topic of safety, the Terios Diva comes fitted with driver and passenger airbags, ABS with EBD and brake assist, a crash-sensing fuel cut-off system, safety-film window coating, central locking and a transponder immobiliser.

I know it appears that I don’t like the Diva. It’s not that at all. I think that the specification level is high, it’s comfortable, good for town driving and easy to park. I’m just not a fan of the Diva name and its connotations. It brings to mind a women who’s really just full of … s … stuff. Or maybe it’s because every time I walk past the car, an irritating line from a Beyonce song pops into my head. “A diva is a female version of a hustler”. Are we being hustled here? Automatic Daihatsu Terios for sale by Chat2Cars in South Africa. 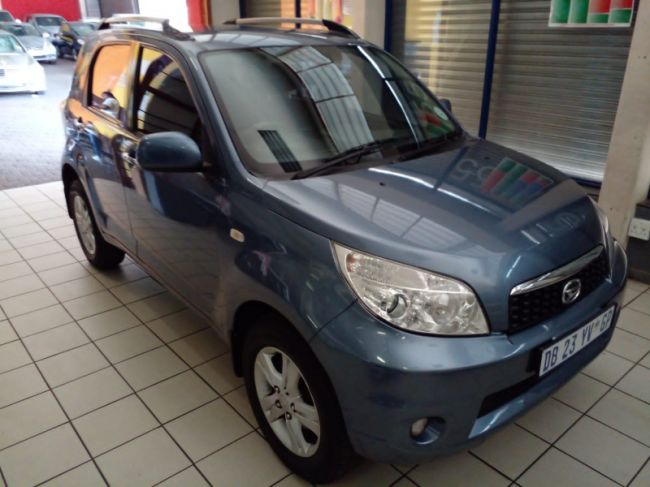