Please note: The buyers guide might be a different variant from the car being viewed.
999447556 Audi and Mini offer their compact five-doors with brawny 2,0-litre engines. Which is the best premium, small hot hatch?

It’s a bit of a neglected market niche, the one for small hot hatches. Ford has chosen not to import the Fiesta ST; the Renault Clio RS is on its way out with no replacement announced; and both Opel and Peugeot are notable for the local absence of OPC and GTi badges. Yet, there are green shoots, too: the Volkswagen Polo GTI has gained a strong following and both Audi and Mini offer upmarket alternatives to those buyers who want their small hot hatch imbued with premium appeal (or who are looking to buy down from their speedy A3s, Golfs and so on).

Here we pit the brand-new A1 Sportback 40 TFSI against the recently refreshed Cooper S 5-door to find out which vehicle strikes the best balance between driving thrills and that golden measure of a successful hot hatch: everyday ease of use.

The A1 comfortably takes round one. Typically Audi in its geometric forms, the A1 is infused with such delightful details as a vent-studded nose paying homage to the iconic Ur-Quattro of the 1980s, racy 18-inch alloys on this press unit (equally stylish 17-inchers are standard) and angular C-pillars contrasting neatly with a dark roof should a brighter body colour be chosen instead of this vehicle’s conservative Mythos Black. LED headlamps are standard on this flagship 40 TFSI model, as are Audi’s dynamic turn indicators which swipe rather than flash. Hot hatch styling cues are taken care of by red brake callipers, an S line body kit and a rear spoiler.

The Mini, meanwhile, is curiously sensitive to viewing angle. Seen from straight ahead, it looks great thanks to its signature faux bonnet scoop, oversized LED headlamps and protruding bumper. Viewed in profile, however, and it’s impossible to ignore the odd proportions; the rear doors simply look too short. If an added smidge of practicality isn’t a big concern, opt for the more poised three-door and save a few thousand, too.

Hop inside and the tables turn. Where an Audi would normally win an interior quality assessment in a comparative test, the A1 proves the German carmaker isn’t infallible. We mentioned in a previous test of the 35 TFSI that some surfaces aren’t quite befitting of a vehicle sporting the four rings and that’s even truer in the pricier 40 TFSI. The door cards are the main offenders. While we have no issue with hard plastics when they’re great quality, the A1’s door panels don’t look and feel up to the automaker’s usual standard. Thankfully, the textured dashboard top feels great, the ambient lighting surrounding the vents is a classy touch and the cloth covering the seats is superior quality.

The Mini, meanwhile, is more consistent in creating an impression of build integrity. Dense plastics are found on the door tops where your elbows rest and this test unit felt notably solid despite the firm suspension doing its best to undo the designers’ good work. Furthering the positive impression are sports seats covered in optional Dinamica/leather trim which invites touching but costs a painful R25 300; roughly textured grey cloth is standard.

What the A1 lacks in instant tactile appeal, it counters with a broadly more usable interior environment. Rear legroom measures 21 mm more than the Mini’s, while all occupants have more headroom too. The boot’s 32 litres larger, too.

Both hatches boast excellent driving positions. The steering columns align with the drivers’ seats (which sounds like an odd thing to mention but you may be surprised how many vehicles have offset driving positions), the chairs drop deep into the cockpits and the steering wheels adjust generously for rake and reach. While the Mini’s seating position certainly feels sportier with its higher cowl and more reclined default setting, the Audi offers clearer sightlines and easier access to most controls.

Both vehicles are well equipped, as befitting their near-half-a-million-rand price tags. They offer automatic climate control, feature-rich infotainment systems, voice control, and light and rain sensors. The Mini adds park-distance control (a R10 500 option on the Audi which bundles in automatic parking), while the A1 sports a digital instrumentation cluster.

On paper, the A1 40 TFSI and Cooper S are evenly matched. Each boasts a 2,0-litre turbopetrol engine, the Audi’s familiar from the Polo GTI and the Mini’s shared with a number of BMW Group products. The A1 offers outputs of 147 kW and 320 N.m of torque from 1 500 r/min through 4 400 r/min, while the Cooper S’ forced-induction powerplant sports 141 kW and 280 N.m of torque between 1 250 and 4 600 r/min. The former’s engine is connected to a six-speed dual-clutch transmission, while the Brit adds a ratio (its dual-clutcher being the most notable drivetrain change in the last round of facelifts). Thanks to a kerb weight some 26 kg lighter than the Mini and that extra 6 kW/40 N.m, the A1 sprinted to 100 km/h 0,14 seconds quicker. By 140 km/h, that gap had widened to 0,23 seconds.

The Audi maintained its advantage in-gear, where it needed 0,33 seconds less to bound from 80 to 120 km/h. In real-world conditions, however, that difference is undetectable. Both hot hatches offer instant punch, their engines feeling alert and strong. The dual-clutch ‘boxes are equally well matched; while the Mini’s Steptronic system is slightly snappier in low-speed manoeuvring, the Audi’s S tronic unit provides quicker changes when charging along a mountain pass.

Braking-wise, the Audi is the clear winner, requiring a brisk 2,74 seconds to come to a halt across 10 punishing emergency stops. The Mini needed 0,24 seconds and 3,33 metres extra. Pedal responses are confidence-inspiring, with the Cooper S again offering a smidge more progression than the A1’s initially sharper pedal response.

It’s here where the two start diverging. The Audi is undoubtedly the better daily driver, with a composed ride caught out only by the most abrupt ridges and scars. It stays flat, rebounds quickly and seems unflustered. It’s an impressive showing considering sports suspension is standard but adaptive damping does play its part. It’s more refined than the Mini, suppressing wind noise well at cruising speed. The augmented engine sound, however, had some testers reaching for the audio system’s volume button…

The Mini, meanwhile, offers firmer springs and very little travel, making for a busy ride when the surface turns choppy. That said, the damping is really polished, with the vehicle rarely losing composure. It’s fantastic fun on a smooth, snaky pass, where quick steering, resolute body control and limpet front-end grip funnel into a dynamic package that feels more engaging than the composure-über-alles Audi. The Mini’s engine is more likeable, too; there’s more top-end fizz and a natural-sounding, induction-heavy soundtrack.

The Audi pips the Mini by virtue of its polished driving manners, stronger performance, better economy on our fuel route and more usable cockpit. It’s a pity perceived quality has taken a knock, making it vulnerable to the mechanically similar Polo GTI at about R90k less. Still, the interior is largely a success and the driving experience is such that the A1 40 TFSI promises to be a rewarding commuter.

Nevertheless, the Mini is more of an experience, more of the time. Certainly, it occasionally frustrates, especially on those weekdays when its haphazard control layout, firmer seats and choppier ride aren’t appreciated. However, every other drive in the Cooper S is rendered an event thanks to the darty steering, fizzy engine and grippy chassis. Five years after its launch, this generation of the Mini has lost none of its appeal. New Audi S1 is not on the cards, hints Ingolstadt exec… Second-generation Audi A1 production kicks off in Spain… World Car of the Year candidates for 2019 announced…

Similar Audi A1 for Sale 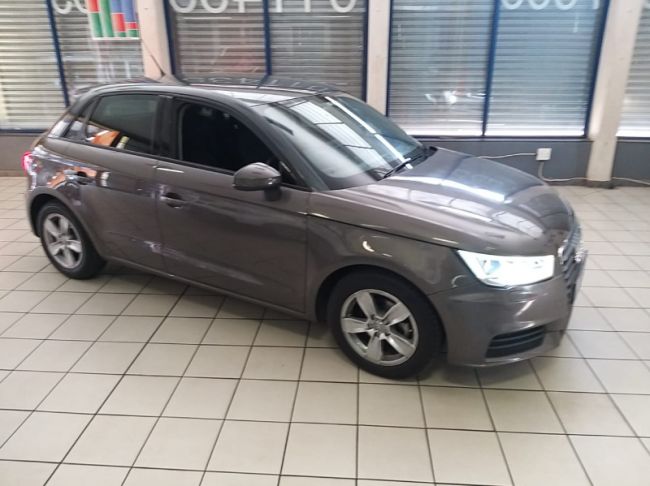