2013 Audi A8 For Sale in Gauteng, Johannesburg

<p>I can trade for a good deal.This car is in a Excellent condition with..Full Service History

Please note: The buyers guide might be a different variant from the car being viewed.
999281872 VALENCIA, Spain – Before commencing anything Audi A8-related (the design, the drive, the technology), there’s one burning question that has to be answered: does the latest iteration of Audi’s halo saloon have what it takes to topple the Mercedes-Benz S-Class from its lofty perch? In the context of a first drive, the usual approach is to set out a suitably measured stance; waiting to spend a spot more time on the familiar side of similarly familiar roads. But the new Audi A8 has seen me walk away impressed enough to say that it’s got the goods to best its longstanding rival.

Flashiness is not Audi’s style when it comes to its halo model, so aesthetically the A8 has always been something of a stealth über saloon, sitting firmly in the conservative, neatly creased sheetmetal framework of its stablemates. The only break from tradition being at the back, where the now bridged OLED brakelamps mark unlocking the car with an eye-catching swirl graphic. The A8’s cabin is one of the best in its bracket, sporting clean lines and uncluttered surfaces – the latter being especially aided by a dash that largely dispenses with analogue controls in favour of a pair of TFT screens. The cabin’s ambiance isn’t as flashy as that of the S-Class, but it’s bank vault-solid, beautifully crafted and as NVH-resistant as you could hope for.

Although torsionally stiffer than its forebear and possessed of plentiful all-wheel grip, the A8 made its two-tonne kerb weight very much apparent when thrown into tight bends such as those encountered on mountain sections of our launch drive. Even so, it’s fairly nimble for something of its size. The steering’s direct but slightly artificial feel lends a surprising pointiness to the helm when the rear-wheel steering system chimes in, adding a welcome degree of engagement to proceedings that the softer S-Class can’t quite match.

Softly spoken but packing a punch

And the 3,0-litre V6 turbodiesel is an impressively refined and torquey unit that’s coupled with a buttery-smooth eight-speed auto ‘box. Leaving Audi’s drive select system in its comfort setting does present some electronic lag to the throttle, but things sharpen up considerably when nudged into sport. Barring a distant diesel purr from the nose, the engine is otherwise whisper-quiet and the tell-tale vibration through the pedals and steering wheel is pleasingly absent. While the 210 kW on offer sits squarely in the “adequate” bracket, the V6’s 600 N.m of torque ensures that there’s plenty of overtaking punch on offer.

When it comes to ride quality, the Audi A8 has always exhibited a stiffer, more fidgety demeanour than its Stuttgart rival, but the standard air suspension system has had a spot more softness dialled in. Although still erring on the stiff side, the A8’s suspension setup largely made short work of the patchwork of surfaces on the rural roads we drove. The optional AI-driven active suspension system utilises the A8’s laser/radar scanner array that oversees an electric motor at each wheel that alters the damping in accordance with road conditions. The result is that road imperfections up to 5 cm in height encountered at moderate speeds are all but ironed out, while bumps over 12 cm are relegated to the slightest jostle and a distant thump from the wheelarches.

In contrast to the showier Mercedes, the A8, with its raft of technologies and finely crafted innards wrapped in a classy but conservative shell, is perhaps the more cerebral choice. But given its virtues, among which is a considerable improvement in ride quality, the S-Class may have to trade on more than just its badge and cossetting nature to see off Ingolstadt’s impressive newcomer… Audi planning to revive Horch name for W12 A8? Sleeper, anyone? ABT gives Audi A8 a little more grunt… Automatic Audi A8 for sale by Chat2Cars in South Africa.

Similar Audi A8 for Sale 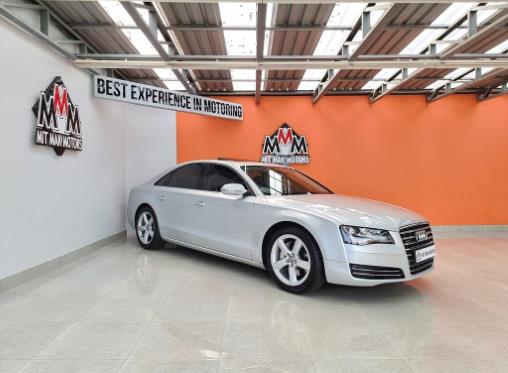