Please note: The buyers guide might be a different variant from the car being viewed.
999237805 WHEN we tested the Up! 1,0 Move for the April 2015 issue, the then freshly introduced Volkswagen (VW) city car endeared itself to our test team through a combination of astute packaging, a fun-filled character and its ability, despite its diminutive size, to exude classless sophistication.

Despite reservations about how well the Up!’s otherwise eager naturally aspirated three-cylinder engine might fare at altitude, as well as the disappointing braking performance from that test unit, the Move garnered an impressive overall test score of 82/100, simultaneously seeing off a match-up box challenge from the Chevrolet Spark and Kia Picanto.

Eight months on and Up! now also refers to the price. Not only does the same R140 000 merely afford you the entry-level Take model, but the recent introduction of a similarly quirky offering from one of VWSA’s strongest traditional rivals looks set to offer the little VW its toughest challenge to date.

Although it’s built on the same production line as the Citroën C1 (the factory is based in the Czech Republic), the second-generation Toyota Aygo has been designed to more obviously distinguish itself from its French rival while aiming at a more youthful customer base than the previous model. Reinforcing this thinking is the availability of an optional (X-play) two-tone colour scheme that adds playful character to the package and places greater emphasis on the Aygo’s distinctive new X-motif front grille.

Parked alongside the more conservatively-styled Up!, the new Aygo’s exterior styling expresses exuberance and flair. Replete with a moulded roof and flared rear wheel arches, the Toyota may not be able to match the VW’s cross-generational market appeal, but the Japanese company has left little to chance in terms of seeking the approval of first-time car owners. To this end, colour-coded door handles and mirrors go some way towards making up for the absence of alloy wheels in the Aygo range. The same cannot be said for the entry-level Up! – it also rides on 14-inch steel wheels, but its handles and mirrors are unpainted.

SMALL SPACES, BIG SPEC
Some 85 mm shorter and 26 mm slimmer than the Up!, the Aygo package nevertheless offers the convenience of rear passenger doors. That said, while the five-door Up! is expected to arrive on our shores early next year, the reward for clambering over the three-door version’s somewhat clumsy front seats (that require two adjustment movements in this model) is discernibly more rear head- and legroom than what the Toyota can muster. A further boon afforded by the longer VW is a notably larger luggage area (160 dm3 versus 128 dm3).

As mentioned, while VWSA touts its mid-spec Move model as the range’s volume seller (a more premium Club was recently added), it’s the entry-level Take that matches the Aygo’s R139 900 price tag to within R100. Unfortunately for the Take, however, its minimalist standard specification list is consequently stacked against that of the generously specced Aygo in the two-model range.

The result is that the VW is left somewhat red-faced by offering manually operated windows and mirrors, a fixed-height driver’s seat, an instrument cluster comprising only a speedometer (no rev counter) and digital trip readout, and only the wiring (and two speakers) required for an audio system. Admittedly, the R5 000 worth of options fitted to our test unit (including audio system, electric windows and driver’s seat height adjustment), together with standard air-conditioning, go some way to enhance the driving experience.

The absence of Bluetooth connectivity (and to a lesser extent a USB port) from even the optional audio system should, however, be noted as a disadvantage, especially considering the tech savvy (and mobile-phone dependent) target market.

While VWSA offers the option of a dash-mounted device, we look forward to seeing a more integrated solution to coincide with the Up!’s mid-cycle facelift.

By contrast, the Toyota Aygo X-play features nice-to-have touches including electric front windows, a height-adjustable driver’s seat, digital rev-counter and, thankfully, one of the most user-friendly and intuitive touchscreen infotainment systems (including Bluetooth, USB and aux-in) in this segment. A thinly covered leather steering wheel and matching gear lever boot complete the package.

Specification aside, the Up! bests the Aygo in terms of the more premium look and feel of its various cabin materials (including some hard touch plastics) compared with those found in the Toyota. Even when you close its driver’s door, it emits a weightier thud than the Aygo.

THE TWO THREES
Adding to the Volkswagen’s superior sense of refinement is the relative lack of NVH permeating the cabin from the 999 cm3 three-cylinder petrol engine compared with that of the 998 cm3 triple in the Aygo. However, the somewhat more frantic nature of the Aygo’s lightweight (69 kg) 1KR-FE motor does go someway towards complementing the more eccentric looks of the Toyota.

With no traction control fitted to the Aygo, the ability to chirrup the 165/65 R14 front tyres off the line allows for an altogether “racier” driving style than the Up!. The VW adopts a more conservative approach (standard traction control cannot be disabled) and its engine feels that much more composed when cruising at the national speed limit. Its tested in-gear overtaking figures also confirmed superior strength through the taller gears. Both cars feature precise, easy-to-operate five-speed manual transmissions and returned impressive fuel run figures.

In a way, the recorded performance figures sum up the differences between the Aygo and Up!. While the Toyota feels that much more sprightly off of the line and, subsequently, lively around town, it can’t (and perhaps doesn’t seek to) match the overall composure and big-car feel exuded by the VW.

A welcome inclusion in both packages, front and side airbags aside, is the standard fitment of ABS-assisted brakes. On that score, our second Up! test unit fared somewhat better than the previous one, albeit still less than exceptionally, during our standard emergency braking tests. Manual Toyota Aygo for sale by Chat2Cars in South Africa. 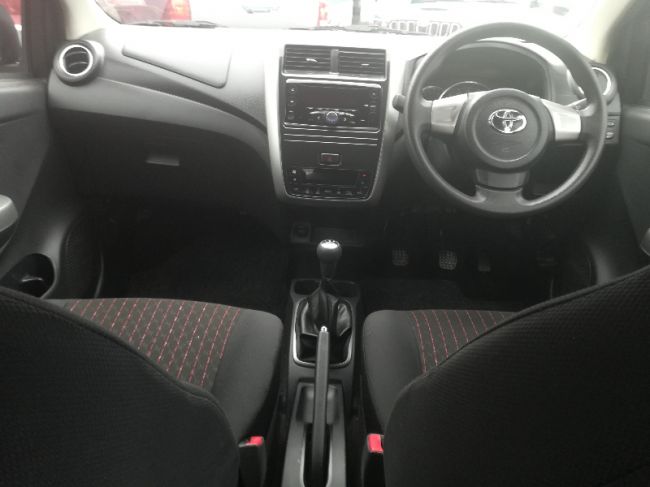 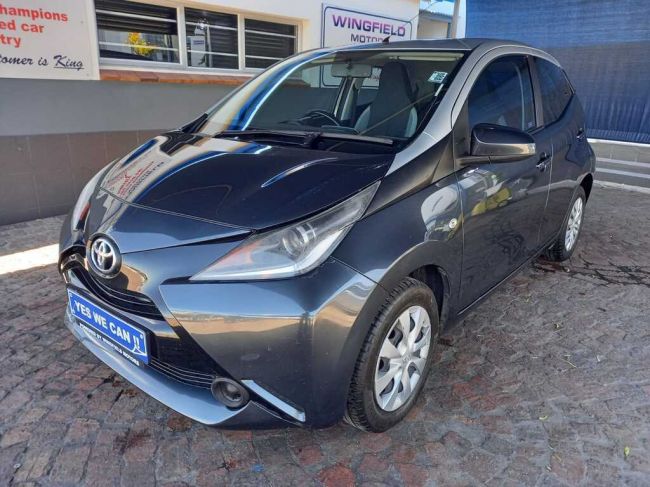