JOHANNESBURG, South Africa – Evolutionary design language is what Audi has become known (and sometimes criticised) for, a spokesperson of the Ingolstadt-based brand’s South African arm said during the local launch of the “revolutionised” A1 Sportback.

However, with the reveal of the firm’s flagship SUV, the Q8 (we tested the 55 TFSI Quattro derivative in the July 2019 issue), it became apparent the firm has its sights set on more progressive interpretations. One of which is the second-generation A1, now offered exclusively in five-door guise.

At the joint-launch of the facelifted R8 V10 Performance coupé and all-new A1 Sportback in Spain in November 2018, we spent some time with the top-ranking A1 40 TFSI S tronic derivative, which sports a 2,0-litre turbocharged four-banger, good for 147 kW and 320 N.m of torque. On a sunny afternoon in the City of Gold, however, we had the chance to sample the mid-tier 35 TFSI A1 Sportback, the variant Audi South Africa expects to be the most popular in the local line-up.

Placed above the soon-to-be-available entry-level 30 TFSI model (which employs a 1,0-litre three-cylinder turbopetrol mill), the 35 TFSI comes with an 1,5-litre turbocharged four-banger, producing 110 kW and 250 N.m. As is with the 30 TFSI, power is directed to the front axle via Audi’s seven-speed S tronic dual-clutch transmission.

Dressed in Python Yellow, the second-generation A1 Sportback cuts a dashing figure, especially when the S line trim is specified. Viewed from the front, gone is the previous iteration’s rounded-off hexagonal grille, replaced by an edgier (and larger) interpretation. Above this item, and at the edge of the bonnet, are three slits, paying tribute to Audi’s 1984 Sport Quattro Group B rally car.

Sited at opposite sides of the revised bumper, the headlamps feature model-specific LED daytime running lights (standard fitment on the model we drove). Items bearing a similar pattern are also found at the rear, adding to the A1 Sportback’s signature design-cues. The sloping roofline and those enlarged colour-coded C-pillars lend the small hatchback a taut figure.

The sharp lines are carried over to the (highly customisable) cabin, where the 8,8-inch touchscreen display and dual-zone climate control system (included, with cruise control and extra storage, in the optional R10 300 Comfort package) are angled towards the driver for easy access while on the move. Of course, most functions can be operated via the leather-clad multifunction steering wheel.

Although digital instrumentation is standard, I would gladly spend the extra R9 900 and specify the Technology package, which adds Audi’s intuitive virtual cockpit, a smartphone interface offering screen mirroring functionality and an improved sound system. The model we sampled ditched the latter for an 11-speaker Bang & Olufsen unit (with 3D sound), priced at R9 500.

Perceived interior quality is good, with the dash finished in a soft-touch material. Unfortunately, the this type of textile is not extended to the door inserts (that said, they too are solid). Gloss black finishes are kept to a minimum to avoid any unsightly fingerprints.

The seven-spoke 18-inch rotor style wheels looks great but upon leaving the city, swapping smooth roads for those requiring the occasional sidestepping of imperfections, smaller wheels seem a better alternative. However, this gave the A1 Sportback the opportunity to stretch its legs.

Its punchy powerplant proved amply endowed when negotiating the countryside. Although this is a city slicker, tackling longer journeys are certainly not out of the question. Overtaking should, however, be performed with consideration, as the turbocharger takes some time to react before the hatch sets off to complete dash from 80 to 120 km/h. Switch the driving mode to dynamic and slot the transmission into its sportiest setting, though, and you’ll largely mitigate this concern.

Although the A1 Sportback now measures 4 030 mm long (56 mm lengthier from before), it remains easy to thread through city traffic. Measuring marginally thinner than its forebear, and with the aid of a crisp rear-view reversing camera, parking is a cinch, too.

The new A1 Sportback is clearly a premium small hatch with loads of character, and it can be personalised to your heart’s content. With the new range, Audi has aimed to offer the same levels of tech and comfort found in its larger vehicles, just in a more compact, more youthful package. And here the Ingolstadt-based marque has succeeded.

Locally, the A1 Sportback 35 TFSI S tronic is available in three trim lines, priced from R429 900 for the base model (see pricing for the entire range, including the 30 TFSI models, here). You’ll pay an extra R14 000 for the “Advanced” specification level, while ticking the box next to the S line package adds R29 000 to the base price. The press car we drove sported the latter, plus R143 600 worth of options (some of which are certainly not necessary).

Of the German Big Three, Audi is the only company offering a small premium hatch (if you don’t take BMW-owned Mini into consideration, that is). However, the new A1 Sportback’s biggest challenger might just come from within the brand itself … in the shape of the A3.

Ultimately, though, if you’re in the market for the stylish A1 Sportback, the 35 TFSI is surely the one to get. It’s a strong all-rounder, both in town and when a road trip beckons. And this more aggressively styled iteration certainly can’t be accused of being “evolutionary”. 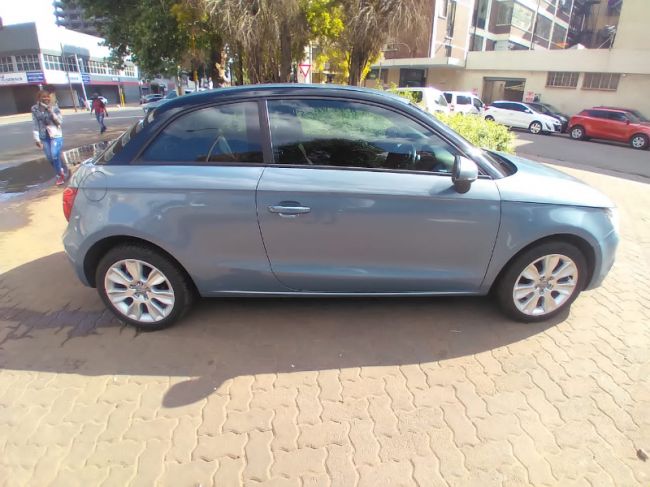