1/4
It's still as capable as ever off the beaten path. 2/4
The Wrangler is much improved on tarmac. 3/4
The new Rubicon Unlimited derivative is 100 mm longer than before. 4/4
We drive the Jeep Wrangler Rubicon Unlimited in Austria. STYRIA, Austria – When launching a new generation of a vehicle with a truly iconic look, designers have to tread lightly. Why? Well, they have to make sure the updated design does not disappoint current fans. And that’s certainly the case with the new JL-generation Jeep Wrangler, which can trace its roots all the way back to 1941. While the brand’s designers have far more freedom to experiment with other Jeep products, it seems wise not to mess with tradition too much when it comes to the Wrangler.

So, the new Wrangler stays true to its heritage, but it has been significantly upgraded in areas that improve driving comfort, driveability and connectivity. The four-door Unlimited model is nearly 100 mm longer than before, while the two-door has grown in length by about 50 mm. Round headlamps are a staple of the past that cannot, in my mind, be bettered by fancy shapes (Jeep tried to go all square in 1987, but soon reverted). A neat feature of the grille is that the outermost of the seven slats is integrated with the curve of the headlamps, a style first made popular with the 1954 CJ. In addition, the top of the grille now curves gently rearwards for improved streamlining. Colour schemes include exotic names like Mojito (green), Hellayella (yellow) and Punk’in (orange).

Lighting is now fully LED. In fact, electrical expert Magneti Marelli now designs the lighting, with seven plus five elements for low- and high-beam, with an array of angled reflectors. That horizontal slit also adds to the animal-like appearance, with a total of 1 900 lumens provided. LED day-time running lights on the front mudguards add to the look, while at the rear you’ll find Renegade-style jerry-can-shaped lenses, but without the central cross. The mounting for the spare wheel has been lowered by 300 mm for better rearward visibility, while the rear door hinges sideways (and the rear window lifts up) revealing a large flat boot and utility area with a subwoofer incorporated in the right-hand panelling.

The windscreen can be folded onto the rubber bump stops on the bonnet by simply removing four top bolts. The rear-view mirror remains in place, while the doors are now lighter and fashioned from aluminium. Torx-bolted hinges make them removable and a grab handle on the inside means they’re now much easier to lift off and stash. At the rear of the boot is a tool section complete with holes for each of the removable bolts, for neat and easy storing. Likewise, the fibreglass roof sections can be unlatched from inside the car, then dropped and stored behind the seats. The rear roof section can also be removed. In other words, you get to enjoy as much open air as you want, just like in the original Willys.

Options are so plentiful that it may prove difficult to make decisions – for example, apart from the removable roof sections, you can also specify a full-length, electric sliding soft-top or a trellis-style manual fold-back soft top with removable soft sides.

The interior has been tastefully modernised with lots of LCD screens featuring loads of information (on both the driver’s screen and the central touchscreen, in 3,5- or 8-inch guise). One screen shows temperature gauges for coolant, oil and gearbox, plus battery voltage. There are plenty of soft-touch materials, along with satin-finish body coloured panels and various chrono-style touches. The gearknob features the Willys Jeep image, while numerous “Easter eggs” in the form of Jeep logos and tokens have been placed around the Wrangler, as was done with the Renegade.

Engine options include a 2,0-litre turbopetrol, a 3,6-litre V6 Pentastar and a 2,2 four-cylinder turbodiesel. While only the new 2,2-litre oil-burner was presented at the launch, South Africa will be getting (initially, at least) the existing 3,6-litre V6 with 209 kW and 347 N.m. We hope that the diesel makes its way here, too, as it suits our needs and boasts a better fuel consumption. An eight-speed automatic transmission is used throughout the range.

Off the beaten track

The trails that we tend to drive on overseas media launches are often very soft, but fortunately, Jeep ensured that we spent some time in the mountains behind the Red Bull Ring circuit, where Camp Jeep was about to held for Jeep owners from around the world. The ground was very slippery after some good rains and we drove both the Sahara with tar-biased Bridgestone Duelers and the Rubicon with BF Goodrich rubber. The Sahara did remarkably well with its Command-Trac system; this uses rear-wheel drive until the driver selects 4H, which locks the centre diff. A new feature is the auto mode, where the centre diff is not locked but will operate automatically, thus saving possible tyre wear. Limited slip caters for left/right torque distribution.

The Rubicon does offer some important additional features with its Rock-Trac system, such as a much higher low-range (4:1 instead of 2,72:1), a front anti-roll bar that can be disconnected electronically for improved wheel articulation, full locking diffs and beefier skid-plates. Grounding is not a problem due to the good clearance, while the recirculating-ball steering has a better feel on the really rough boulders and tree roots. These vehicles inspire total confidence over pretty much any terrain. Ground clearance comes in at 250 mm, while approach and departure angles are 36 and 31 degrees, respectively. Water wading depth is 760 mm.

One of the issues with a serious off-road vehicle is how well (or poorly) they cope with tar. We can safely say that in the case of the Wrangler this has been improved, with the latest generation featuring a more comfortable ride, not too much sway in cornering, improved NVH, more rear-seat legroom and little in the way of rattles and squeaks from the many bolt-down, removable panels. Towing capacity is 1 500 kg for the two-door and 2 500 kg for the four-door models.

The existing three-year/100 000 km maintenance plan is likely to remain in place for South African buyers, but pricing still has to be nailed down before the Wrangler’s local arrival, which is planned for the end of 2018. An array of Mopar accessories will furthermore be offered, with Jeep saying the vast majority of Wrangler purchasers end up customising their vehicles. 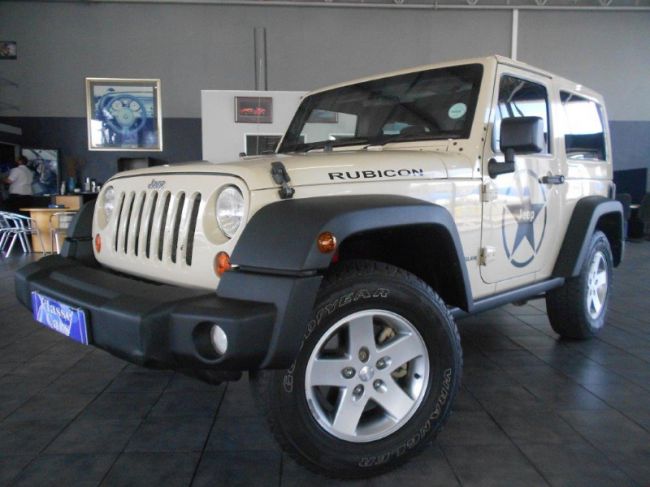