2/7
Plenty of presence out on the road. 3/7
The M760Li features an extended wheelbase. PALM SPRINGS, California – One seldom associates a luxury limousine with “M” powertrains, but BMW is a sporting manufacturer and thus decided to create the ultimate “crossover” vehicle by infusing the super comfortable 7 Series (with an extended wheelbase for that executive-style space in the rear) with the biggest and most powerful engine in its arsenal – the 6,6-litre V12 with dual turbos.

Before you ask, the output is 448 kW and the maximum torque is 800 N.m. To control this sort of power with a structure weighing in at 2,2 tonnes, four-wheel drive was considered the way to go. This in turn gives the extra traction required to accelerate from standstill to 100 km/h in a claimed 3,7 seconds. Enough to see off just about everyone you don’t like.

As standard, you can’t go faster than 250 km/h due to sense and sensibility, but you can choose an M Driver’s package that will raise the limit somewhat, to 305 km/h. The transmission is ZF’s excellent eight-speed Steptronic, which does the business with ease. When you choose Sport mode, the gear changes speed up, the throttle becomes sharper and the exhaust starts to emit a real V12 wail.

We won’t say much about the styling or extensive feature list as these aspects have covered before. What is prominently displayed are the M and V12 badges … and why not? Larger air intakes and 20-inch wheels are the most visible changes apart from this exclusive badging.

The engine has a 60-degree included angle with each turbo supplying a bank of six cylinders with force-fed air. At the other end, large diameter exhaust pipes reduce back pressure. Flaps inside the rear silencers are opened when the Sport button is pressed.

Active roll stabilisation now uses electro-mechanical actuation instead of hydraulic. The construction makes use of carbon-fibre, especially around the passenger cell, thus reducing the mass as far as is possible with so many luxury features … plus, of course, the added mass of the four-wheel-drive components.

Next up is the addition of rear-wheel steering to sharpen cornering responses, with the all-wheel-drive system biased towards the rear wheels (but still fully adjustable).

Another thing you don’t normally associate with luxury limos is a racetrack, but BMW took us to its facility at Palm Springs, California to see how the M760Li would fare. We started on the tight go-kart track and experienced the noticeable differences between Drive and Sport modes.

We also tried the launch control, which can often be a very tricky feature to get to work in BMWs. But that applies to SMG gearboxes and since this is a conventional epicyclic transmission, one merely has to select Sport, left-foot brake and press the accelerator. The chequered flag illuminates and off you go. This works every time and there is no wheelspin or histrionics thanks to the grip of four biting tyres.

We then headed for the track to be shown the ropes by none other than Augusto Farfus, the works BMW race driver. The handling and braking was certainly impressive and very neutral with none of the understeer one could expect from such a large vehicle with a huge engine up front.

To test the cruising ability of the M760Li, we later had the chance to drive one of the best mountain passes I have experienced. The road is called Pines to Palms as it takes one through the snow-clad pine plantations, winding almost endlessly until it arrives at the semi-desert areas with numerous palm trees competing with housing developments and golf courses for visual appeal.

The car is super quiet, smooth and an absolute pleasure to drive. If you are a competitive driver and someone wants to challenge your driving skills, just select Sport and it’s unlikely that they will keep up. But then, you do have to pay a premium for the privilege of owning a rocketship limousine… 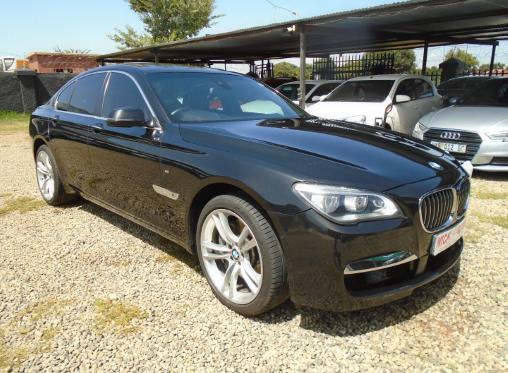