1/9
Headroom is sufficient, but knee clearance less than on an A3. 3/9
Gone is the rotary scroller ditched for a touchpad. 4/9
This A200 is equipped with the R25 000 AMG Line package, which includes lowered comfort suspension, a body kit and 18-inch alloy wheels. 5/9
The new A–Class represents a sea change in the quality of Mercedes-Benz’s entry-level offering. 8/9
Larger than before, the A looks more grown-up. 9/9
The new Mercedes-Benz A200 is markedly improved, but pricey. The new A–Class represents a sea change in the quality of Mercedes-Benz’s entry-level offering. We test the A200…

Although the closely contested automotive arms race between the German Big Three can be dated to the early 20th century, these firms broke premium-hatchback ground only within a year or so of one another in the 1990s. With BMW’s E36 3 Series-based Compact treading its own RWD path, it was the sales rivalry between Mercedes-Benz’s A-Class and Audi’s A3 that set the premium-hatch-segment rolling.

Closely based on the Volkswagen Golf, the A3 represented a safe approach to the new field, majoring in refinement and build quality as adjuncts to a badge that, at the time, did not hold quite the same cachet as the Three-pointed Star.

Benz adopted the opposite method, hinging innovations such as a space-creating and crash-safety-improving “sandwich” chassis construction to a brand already possessed of a powerful draw. It proved something of a double-edged sword, though. The first-generation gained notoriety for its failure of the “elk test” evasive-manoeuvre exercise, while the second-generation car, although better crafted and spacious, looked rather MPV-dumpy when viewed against sleeker rivals. Benz’s more recent tilt at the premium-hatch segment placed greater emphasis on styling as the outgoing model attempted to offset its dynamic and packaging shortcomings with a bold wrapper. But, with the A3 seemingly going from strength to strength, this fourth-generation car needed more than just a pretty face adorned with that covetable badge to make a meaningful impact.

When Mercedes-Benz unveiled the striking Concept A at the 2017 Shanghai Auto Show, appetites were suitably whetted for the production version to come. While Mercedes-Benz has attempted to slant the style-versus-substance equation a little more to the latter, the new car’s close adherence to the Concept A’s design means it’s no shrinking violet. As the first recipient of the firm’s “predator face”, the A affects a striking pose (head-on, at least). The tail, although echoing the more horizontally oriented taillamp array that’s become a Benz staple, is by contrast neat but largely nondescript.

While the new A-Class is underpinned by a reworked front-wheel-drive platform marginally longer in the wheelbase and wider in the beam, its interior dimensions are close to those of its predecessor. It may have been an upshot of the chunky, well-bolstered AMG line seats fitted to our test unit (other versions have more traditionally shaped seats with adjustable headrests), but our measurements showed that, while luggage space has taken a welcome upward hike from 208 to 272 litres, rear kneeroom is similar. The seats, although form-fitting and supportive fore and aft, also feature fixed headrests that impinge on the degree to which the rear backrest can be flattened with a six-foot occupant up front, compromising the utility space to some degree.

But that about covers any gripes we could level at the A’s interior. The design and execution of the facia represents a sea change from the previous car’s creaky and ergonomically clumsy affair. Although not quite as dense of plastic and rattle-free as an Audi A3’s innards, the A’s interior nonetheless feels considerably better screwed together and has character its rivals would kill for. Touches such as the ambient-lit turbine air vents which glow red or green according to HVAC temperature control inputs, plus the glass panel that houses Mercedes’ crisp, function-rich MBUX “Hey Mercedes” infotainment interface (a version which is optional; smaller displays are standard with more limited MBUX functionality) and the extra-cost digital-instrument cluster floating above the tiered dash are an absolute treat to behold.

Mercedes-Benz has stuffed a good deal of sound-deadening material into the new car and the improvement in overall running NVH is palpable. But, while the cabin is well insulated against road noise on anything other than really coarse-grained surfaces, the Renault co-developed 1,3-litre turbopetrol engine occasionally sounds mechanically unrefined when pushed – there’s a curious rough patch between 2 500 and 3 000 r/min that can be clearly felt in the steering and pedals – but this smoothens out once at speed.

One aspect of the engine that doesn’t disappoint, however, is its overall performance. With 120 kW and 250 N.m served up in a broad swathe from 1 620 to 4 000 r/min, it’s a flexible unit with plenty of punch in the mid-to-upper rev range, posting a sub-nine-second 0-100 km/h sprint time during performance testing and impressively matching the manufacturer’s claimed 6,7 L/100 km on our fuel run.

The A’s reworked seven-speed dual-clutch transmission is generally a smooth operator and feels a bit more alert than the previous car’s unit, although manual inputs are still rather leisurely. The low-speed slip which often afflicts dual-clutch units is thankfully all but absent here, although the grabby brakes require practised modulation to make low-speed manoeuvring less abrupt. At speed, that sensitive pedal and strong bite brought the A to a stop from 100 km/h in less than three seconds, garnering an “excellent” rating on our testing scale.

Our A200 test unit was equipped with Mercedes-Benz’s Dynamic Body Control adaptive suspension. This setup incorporates a MacPherson strut front/multilink rear arrangement and is overseen by the firm’s Dynamic Select drivetrain-control system. While the virtues of this system’s drivetrain presets are largely moot, the adaptive suspension system works well to rein in body lean and is allied with steering that’s light yet direct to make the new A an entertaining little car to drive. The ride quality is similarly impressive, proving more supple and better resolved in terms of rebound and composure over larger road imperfections, despite working against 45-profile run-flat footwear.

While we were suitably pleased with the A’s newfound composed road manners, there is a caveat. The adaptive suspension system is a R22 400 option and Mercedes-Benz has decided to move away from the previous car’s multilink rear arrangement to a newly developed torsion beam tail on entry-level models. The firm’s engineers claim this new setup shaves 7 kg from the car’s kerb weight and its geometry has been tailored to serve up a comfortable ride befitting the brand’s products. Although we’ve no doubt Benz’s boffins have done all they can with what’s largely seen as a budget-car suspension arrangement (although it’s becoming more commonplace in this market, with the VW Group and Ford doing the same), such claims need to be taken with a pinch of salt and we’re going to reserve overall judgment of the new car’s capabilities once a standard-spec car comes our way.

Speaking of specification, the modestly equipped A has the potential to spring an unexpected price-tag trap for those giving little thought as to how their car is specced. Our unit bristled with around R200 000 of options and, while it appeared well equipped, it didn’t feel as special as the R700 000 price suggested. This is particularly galling when you take into consideration the car costs half a million rand before any extras are attached. 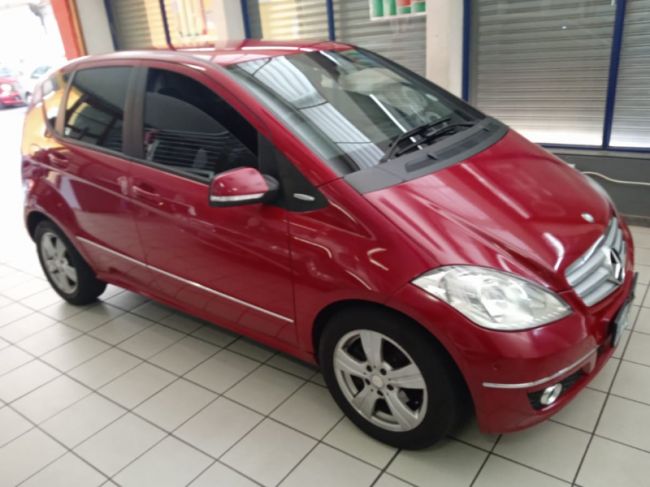