THE original Audi TT is one of those landmark designs that deserves a place in motoring history. CAR was at the unveiling of the concept at the 1995 Frankfurt Show, where it was a sensational hit, its curved roofline – claimed to have been inspired by the Auto Union streamliners of the 1930s – and clamshell bonnet setting it apart from fussy contemporary sportscar designs. It was billed as “a realistic 2+2, made purely for the fun of driving”.

After such an enthusiastic reception the Ingolstadt firm simply had to go ahead and release it, bringing the option of sportscar ownership to Golf aficionados. In Germany there was an initial hiccup when some drivers, used to the forgiving handling characteristics of their Golfs, got into some bother with the more “on-the-edge” characteristics designed into the first TTs. After much negative publicity, the suspension was tweaked, ESP was fitted as standard and the car grew an ugly rear spoiler that always looked like an add-on.

Deservedly though, the model, available in coupé and cabriolet versions, was a huge sales success. Overseas it was offered in four-wheel drive Quattro as well as lower-priced front-wheel drive versions, but in South Africa it was sold only in Quattro guise.

Then came Audi’s style revolution, led by design chief Walter de’Silva’s “single-frame” grille, which served as a riposte to the Bangle BMWs and increasingly baroque Mercedes creations. An all-new TT arrived, still featuring the trademark roofline, but slightly bigger, arguably losing some of the purity of the original. Still, in coupé form at least, it remained a distinctive-looking icon.This time it was offered in South Africa in both front-drive and Quattro versions.

A dozen years after the TT concept unveiling another showcar seized the imagination of Frankfurt showgoers. The Peugeot RCZ, which echoed the TT in its archedroof style (this time with the arches in unpainted aluminium) and clamshell bonnet, but added a sets the standard. “twin bubble” rear window, was unveiled to similar adulation, prompting the French firm to put it into production. In similar vein to the Audi blurb issued back in 1995, Peugeot’s publicists stressed that the RCZ had been designed “for pure driving enjoyment”.

Three years on, it’s here, ready to do battle with the second-generation version of the groundbreaking Audi. With Peugeot aiming at a model spread slightly lower down the price scale than Audi, the two most comparable models are the “entry-level” fwd TT Coupé 2,0 TFSI manual and the current rangetopping RCZ 1,6 THP manual.

Style is an important attribute in a personal coupé and both of these rivals have that in spades. The Audi set the trend and remains distinctive, though the more grown-up secondgeneration has lost some of the pizzazz of the original. One tester went so far as to say that the latest TT looks “blobby” in certain colours. It’s certainly not as “petite” in its appearance as the original or, it has to be said, the Peugeot. One big improvement over the first-generation is the “designed-in” rear spoiler, which rises automatically above 120 km/h or can be raised by pressing a button on the centre console. Although the standard TT wheel is a 17-incher, our test unit came with optional (R13 800) 18-inch twin-spoke Turbine alloys with 245/40 Bridgestone Potenza run-flats, a combination that gives it a real planted-looking stance on the road.

One observer remarked that the Peugeot RCZ looked “like a mini-Veyron”. It certainly is special- looking, the contrast between the aluminium roof spars and the black paintwork of our test unit giving it a jewellike appearance. Although it has the TT-like arched roof, the car is almost “cab-forward” in its proportions. Flared fenders front and rear, cloaking 19-inch alloy wheels with five double-spokes wrapped in 235/40 Continental ContiSportContact rubber give the RCZ a purposeful stance. (Incidentally, though the Contis aren’t run-flats, the Peugeot has no spare, only a puncture repair kit under the boot board.) The “look” is enhanced by an active rear spoiler similar to the Audi’s.

But the Peugeot’s styling coup de grace is the double bubble rear window and roof, a feature that really stamps the RCZ as something quite unique. One of our testers bemoaned the fact that the shape of the glass precludes fitment of a rear-window wiper, but in practice nobody was bothered by this. Another criticism was that the front end, taken straight from the Peugeot 207 to contain costs, just doesn’t look “special” enough.

Inside, the contrasts between the two rivals echo the outsides. The TT follows established Audi style for instruments and controls, with what seems like acres of softtouch black laminate on the facia, relieved by subtle alloy touches. The Peugeot features a classy-looking stitched-on grey leather covering for the facia. Again, there are flashes of alloy to provide contrast, right down to aluminium pedal faces. Similar pedal treatment in the Audi (not featured on our test car) comes as part of an “extended aluminium package” at an on-cost of R2 680.

Being sporty coupés, interior space is compromised in both cars. Our tallest tester found that, with the driver’s seat adjusted to his liking, there was no room for the legs of passengers in the rear compartments. But both cars do offer sizeable luggage compartments with divided rear seatbacks that fold forward to provide various loading configurations.

Cramped rear seats apart, both cars offer comfortable, supportive seating for average-sized drivers and front passengers. But our taller testers had beefs about both, struggling to achieve correct seat/pedals/wheel relationships. The Audi uses a manual adjustment system, with electrical operation available as an option (R8 840). In the Peugeot, the chairs feature electrical adjustment and heating as standard. Leather upholstery is common to both, as is as is rakeand reach-adjustable steering. Both test cars are equipped with all the features you would expect on vehicles at this level, including cruise control, dualzone climate control, automatic headlight activation (optional on the Audi), front and side airbags, remotely-adjusted electric exterior mirrors and electric windows with one-touch capability.

Our TT test car had Audi’s optional Symphony audio system (R5 200), which is MP3- compatible, has Bluetooth functionality for mobile ’phones and features a USB port and auxiliary socket. Satellite controls on the steering-wheel spokes are intuitive and work well.

We’ve remarked on the Peugeot’s elegant facia, but in the opinions of most testers the Gallic contender loses points for its shiny plastic console and standard Peugeot audio system. The latter is also MP3- compatible, features Bluetooth functionality and has a USB port and mini-jack auxiliary socket. As on other Peugeots, remote controls for the set-up are on a steering column stalk, which is more fiddly than steeringmounted systems and takes a couple of trips to acclimatise to.

Designed as they are for driving fun, both the TT and the RCZ are a cut above the norm in their dynamics. The Audi has a Golf-like character to its steering, which is no bad thing, though one might prefer a slightly less insulated feel in a machine designed for sporty driving. Grip is good, but there is occasionally some wheel-fight if you get on to the throttle hard in a corner when the body attitude is not settled. Ride is good, too, but the suspension can knock through over bumps.

Peugeot, renowned for its suspension- tuning abilities, has produced the slightly better ride/ handling package here. The suspension is a tad firmer than in the Audi, but still comfortable, and there’s none of the bump-through that one experiences in the TT. The steering is spot-on, providing near-perfect weighting, insulation and feedback and outright grip is leech-like. The chassis is superbly adjustable on the throttle, combining with the precise steering to provide characteristics that are fun as well as benign. On a twisty road, this car clamshell bonnet, but added a sets the standard.

Both cars have superb brakes, earning excellent ratings in our 10-stop 100 km/h-to-zero emergency stopping test. In both, pedal feel is excellent, making the brakes easy to modulate in normal driving.

It’s to be expected that the Audi will be the quicker car against the clock, though this is not really discernable on the road. And out on the test strip the differences were smaller than one might have expected from the manufacturers’ claims. The Audi proved difficult to launch in our acceleration tests, much of its power advantage being lost as the front wheels scrabbled for grip. We managed a best 0 to 100 km/h time of 6,95 seconds, some way off Audi’s 6,1-second claim. Bigger tyres and the fact that second gear is good for 94 km/h, necessitating a change just tenths before the 100 mark, also don’t help. Once on the move, progress is dramatic, the reasonably slick gearbox allowing quick changes that helped in despatching the kilometre in 27,25 seconds, at a terminal speed of 199 km/h.

Off the mark, the Peugeot is a dream, putting its power down perfectly. Also requiring a change to third just before the 100 km/h mark, our test unit nevertheless managed a time of 7,81 seconds for the sprint, not far off the manufacturer’s 7,5-second claim. The kilometre was completed in 28,28 seconds, at a terminal speed of 190 km/h. The Peugeot is helped hugely by its super-slick gearshift, which is a joy to use.

Both cars also exhibit great fl exibility, a far cry from the days of irritating turbo lag. It’s interesting when examining the single-gear overtaking fi gures to note that the smaller-capacity Peugeot actually matches the Audi in almost every ratio!

The Audi’s CAR fuel index is about what one would expect for a modern 2,0-litre turbo. With its 55-litre tank, a TT returning our calculated fi gure of 9,24 litres/100 km would manage 595 km between refuels. But the Peugeot’s fi gure is excellent. Also equipped with a 55-litre tank, at our estimated index of 8,3 litres/100 km it would manage 663 km before having to visit the pumps.

Taking into account the cost of the options on the test TT Coupé, one can add at least another R20 000 to the R423 730 list price of the Audi. That makes it a lot pricier than the R373 000 Peugeot, which comes with more standard features. But is the price difference of roughly R70 000 enough to compensate for the likelihood that the RCZ, in the light of recent experience with French cars on the local market, is likely to depreciate at a faster rate?

We still rate the Peugeot as the slightly better buy, given its superior handling dynamics, comfort and the extra driving fun it offers. Make no mistake, the Audi is as good as it ever was, but the newer, more agile and more stylish Peugeot has advanced the game.

In many ways it really hurts to award the tie. Fact is, we love the RCZ and, by the criteria of sheer style and driving pleasure, it deserves to win.

While the original TT is one of our all-time favourite coupé shapes, the latest generation has lost much of its predecessor’s refreshing originality. But it’s the driving experience that really makes one love the RCZ. It’s terrifi c fun – great engine note, wonderful short-throw transmission and good punch from low down. Ultimately it is not as fast as the TT but it is more entertaining.

Tottaling up the categories would put the RCZ in front, but the TT has the Audi name and it does what it’s designed to do very competently. And its slightly less extrovert nature will appeal more to some. Where it really closes the Peugeot down is in its brand cachet and potential resale value. So there’s more heart in the Peugeot score, more head in the Audi fi gure! 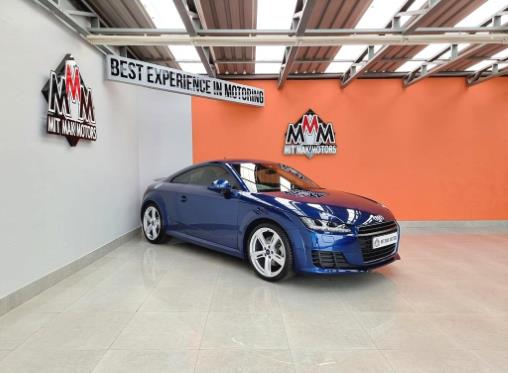