The second-generation BMW X6 and the Mercedes-Benz GLE Coupé have been trading blows in the large coupé-crossover arena since 2015, with the likes of the Range Rover Sport (and, latterly, the Velar) likewise landing a few heavy punches in this style-led space. So, what about the third member of the Teutonic triumvirate?

Well, Audi has finally joined the fray with the Q8, relying on its fresh-faced flagship SUV to shake up Ingolstadt’s largely conservative image. Late to the party it may be, but the newcomer’s arrival could hardly have been better timed, what with the F16-generation X6 and the C292-generation GLE Coupé nearing the end of their respective lifecycles.

That leaves the pinnacle of Audi’s SUV line-up with plenty of breathing space as it attempts to carve out a niche within a niche. The fact it feels particularly distinct from the vehicle on which it is based – certainly more so than is the case with its two German foes – further broadens its appeal. Indeed, despite sharing the Q7’s usefully lengthy wheelbase, the Q8 is 66 mm shorter and 27 mm wider than its sibling, with its sloping roofline also some 35 mm closer to terra firma.

In addition, the Q8’s exterior design is far removed from that of the Q7, both where you’d expect it (at the rear) and where you might not. Up front, for instance, the newer model gains a fresh and far more aggressive octagonal interpretation of the firm’s signature grille, bordered by a chunky body-colour frame (also available in black or grey as part of a brace of S line packages, the former fitted here).

It’s joined by gaping air inlets and sharply sculpted matrix LED headlamps (complete with sleek dynamic indicators) that perform a neat lighting dance each time the vehicle is locked or unlocked. Round back, the Q7’s blocky taillamps have been binned in favour of an in-vogue full-width arrangement similar to that of the A8 saloon. Disappointingly, though, like our recently departed SQ5, the Q8 has been saddled with faux-exhaust outlets.

The makeover continues inside, where (in addition to Audi’s peerless Virtual Cockpit digital instrument cluster) the Q8 jettisons most physical controls and adopts a pair of stacked touchscreens. The upper 10,1-inch display covers infotainment and navigation functions, while the 8,6-inch arrangement sited below it takes care of climate control and other convenience functions.

While certainly pleasing to look at, the touchscreen-based system is not the most user-friendly on the move, even though Audi has added a haptic-feedback feature in an attempt to confirm (tactilely and acoustically) each time an input has been successfully received. In reality, the screen requires too firm a prod, with some testers suggesting Audi should have instead simply retained the conventional rotary controller. In addition, we found the voice-control function not quite as sophisticated as those offered by the two other German luxury automakers.

Although the cabin’s fit and finish are exemplary, more than one tester commented certain areas were a tad plain considering the Q8’s lofty price tag. The upper dashboard and parts of the interior door trim, for instance, could certainly have benefited from some soft leather, while the expanse of gloss-black material on the facia attracted criticism for its tendency to accumulate unsightly fingerprints.

Space inside the five-seater, however, is particularly generous, with headroom in the rear still plentiful despite that sloping roofline and the standard-fit panoramic sunroof. The luggage compartment, too, is capacious, capable of swallowing almost as much as that of the Q7, according to our strict measurements. The standard four-zone climate-control system, meanwhile, allows passengers seated aft to take charge of their own cooling and heating requirements via a nifty touchscreen positioned above a pair of dedicated USB ports. Curiously, though, the rear windows drop only around halfway down.

A further point of distinction between Audi’s 7- and 8-badged Q cars is found beneath the bonnet. While the SA-spec Q7 is offered exclusively in 3,0-litre TDI form, the Q8 arrives in petrol guise, with an oil-burning variant set to be added later in 2019. An engine also employed by various S-badged Audi Sport models (albeit here with slightly less grunt), the single-turbo V6 petrol powerplant is mated to all four corners via an eight-speed automatic transmission that seldom puts a foot wrong.

With peak outputs of 250 kW and 500 N.m (the latter on tap from 1 370 all the way through to 4 500 r/min), the smooth-revving TFSI unit offers more than sufficient punch, even if the vehicle’s as-tested 2 282 kg mass blunts its response somewhat. While it’s certainly rapid (in an undramatic manner typical of fast Audis), the newcomer does its best work when simply wafting along. That’s perfectly fine considering Ingolstadt is furiously developing an SQ8 and possibly even an Urus-rivalling RS Q8.

It’s a similar case when it comes to dynamics. While the Q8 exhibits tight body control – and the R19 127 all-wheel steering setup fitted to this unit further improves agility – it simply doesn’t goad its pilot to push on and is best left in comfort or auto mode (that said, the Q8 scored an excellent rating in our punishing braking test). Frustratingly, however, you can’t assign the Drive Select feature to the steering wheel’s programmable favourites button, so toggling between driving modes requires a stretch across to the touch-sensitive buttons on the passenger side.

In a bid to rein in the V6’s consumption, Audi has added mild-hybrid technology in the form of a 48 V electrical system comprising a lithium-ion battery and a belt alternator starter. The Q8 can also coast under certain conditions, with the accelerator vibrating to encourage the driver to lift off and let the engine briefly shut down. Despite its frameless door glass, the Q8 boasts high levels of refinement, with very little engine bark or road/wind noise finding its way into the cabin.

The unit tested here is fitted with Audi’s adaptive air suspension sport arrangement (as part of the R43 680 S line Sports package) that, despite being a touch too reactive over sudden bumps, affords the Q8 a ride quality not usually associated with vehicles on (optional) 22-inch wheels. Comfortable it most certainly is. 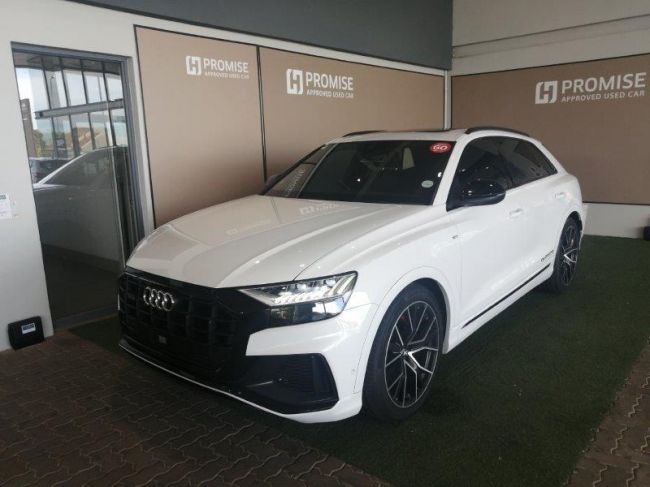