2/3
For now, the Elantra range will solely consist of two 1,6-litre models, in manual and automatic guise. 3/3
Elantra's facia now boasts a new finish around the audio and ventilation controls. The current generation Hyundai Elantra has already won such accolades as the 2012 North American Car of the Year and South African Car of the Year, but with fresh competition such as the new Toyota Corolla currently on offer – it was just about time for an update. The updated 2014 Elantra has just been launched in South Africa and I drove it at a media introduction in Cape Town.

Not that there was anything wrong with the Elantra – the C-segment stalwart really started to capture the minds of consumers with its blend of cabin room, striking design, luggage space and strong standard specification. For 2014 however, Hyundai’s chosen to improve the Elantra in a few key areas.

Up front, the new Elantra boasts a new front bumper, with redesigned grille, fog lamps and headlamps. Along the profile, brushed chrome beadings and new 17-inch alloy wheels have been fitted – while the rear end benefits from a new bumper and LED combination tail lights. The new bumpers have added 20 mm to the Elantra’s overall length.

Inside, the updates include repositioned ventilation outlets, raised central armrest, and new trim on the facia around the audio and ventilation controls. The climate control interface has also been redesigned, while electric folding mirrors and auto-up function for the driver’s side electric window have been added to the standard specification. More importantly, Hyundai’s engineers have tried to reduce noise, vibration and harshness through the use of more absorption materials and anti-vibration pads in the A-pillars, floor and facia.

Leaving the business presentation venue in Melkbosstrand, I was impressed with how smooth the trusty Gamma 1,6-litre four-cylinder engine was. Modulating the clutch and shifting the six-speed manual gearbox was effortless. Out on the open road, on the N7 northbound, the Elantra’s refined ride was a further surprise. The simple suspension layout soaked up the many imperfections that have resulted from the incomplete roadworks that have dotted that stretch of tarmac of late, despite the low profile rubber that wraps the 17-inch alloys but the reduced noise was what truly stood out. The efforts to improve comfort overall have clearly been successful.

Turning off the busy N7 toward the dusty B-roads in the direction of the small town of Riebeek-Kasteel presented an opportunity to stretch the Elantra’s legs a bit. While it is mostly competent, the 1,6-litre engine is clearly geared for good fuel economy because I had to stir the six-speed ’box quite a bit to keep momentum up. The average fuel consumption, around 7 litres/100 km was a further feather in the Elantra’s cap.

Summary
The updates have elevated the Elantra’s appeal. Unfortunately, the range has been limited to a normally-aspirated 1,6-litre model for the foreseeable future as the exchange rate continues to be unfavourable. Still, this 1,6 Premium makes a strong case for itself in a segment stacked with strong contenders. 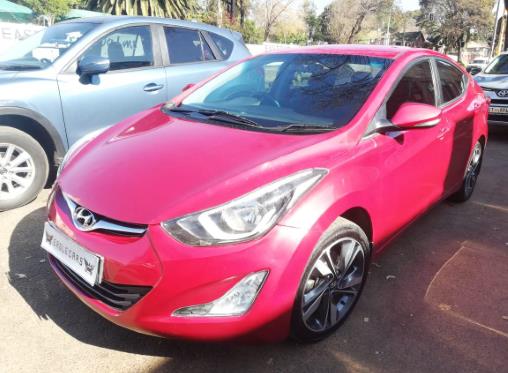