With so many manufacturers treading unchartered territory thanks to niche models and crossovers that blur segment lines, it was just a matter of time before Mercedes-Benz ventured in the same direction given that its homeland rivals BMW and Audi have strong model offensives on that front.

The GLA, essentially a crossover version of the new, third-generation (W176) A-Class, is now available in South Africa. Mercedes-Benz South Africa decided to launch the new model on the Western Cape’s Garden Route to a media contingent eager to sample the GLA on local asphalt – especially after glowing international reports.

In the metal, it’s pretty

You’ll see the GLA in three main guises in South Africa, Style, Urban and AMG Sport, with further options and kit that add a touch of extra personalisation. The unit I drove was a GLA220 CDI, which sported AMG body treatment, but not quite like that featured on the GLA 45 AMG that Gareth Dean drove in Spain earlier this year.

Of course the focus is less on the all-out performance that the GLA45 exudes, but the styling highlights spruce up the GLA’s obvious crossover traits such as the differing panels on the lower ends of the front and rear bumpers, as well as the side sills – all of which boast a metallic finish. This finish can also be found on the front grille and roof rails.

High-quality cabin, though on the cramped side

The GLA’s cabin is a familiar affair, given recent experiences with A-Class models such as the A250 and the CLA sedan spinoff at CAR, but somehow the GLA seemed more purposeful than its chassis cousins. Perhaps this is because of the raised ride height and the more commanding seating position. There’s the same premium quality of panels, and welcoming mix of sporty front seats, large infotainment screen and soft-to-the touch leather upholstery.

The driver’s accommodation was comfortable enough for my 1,70-metre frame, but the seat-behind-self test revealed that the GLA’s rear bench didn’t quite leave the room to play with that most people associate with a crossover. Taller rear seat passengers might find longer trips a bit of a squeeze…

Fortunately, it seems the GLA’s boot is where much of the room’s gone, and when the rear seatbacks are folded (virtually flat), they open up to 1 235 litres of utility room. This is especially useful for those who pursue active lifestyles, which is the market that Mercedes-Benz is targeting with the GLA.

Outstanding performance, on- and off-road

The turbodiesel four-cylinder motor is slightly on the gruff side when it comes to life, though the noise smooths out when the GLA’s on the move. The 125 kW peak doesn’t sound like much, but is countered perfectly with 350 N.m of torque that is available from just 1 400 r/min all the way to the torque peak, making for swifter progress from a crossover than I initially expected.

Even though this particular region of the Western Cape is notorious for its myriad of fixed cameras and mobile speed traps, we got our fair chance at exploiting the GLA’s dynamic prowess. No doubt helped by the AMG sport suspension (which lowers the ride height by 15 mm) as fitted to the unit I drove, the GLA displayed neutral and predictable traits that inspired much confidence on flowing tarmac of the Garden Route.

But it was off the beaten track that the GLA impressed me the most. Its combination of sure-footedness (thanks to the 4MATIC all-wheel drive) and effortless nature (the driver can use ascent slip regulation and downhill speed control to his/her advantage), on the gravel-only and rally stage-like Phantom Pass and later during more strenuous off-road exercises, is one of its strongest hallmarks. But I’m not so sure about the AMG kit and lower suspension. If light gravel work is about the most off-road your GLA is going to see, then fine. More difficult terrain, which we experienced on the launch, warrants the optional off-road suspension – which increases ground clearance and opens its approach and departure angles.

The GLA is another great product from Mercedes-Benz. In fact, it might be the very best offering on this platform. Its obvious rivals, the Audi Q3 2,0 TDI Quattro S tronic (R466 500) and BMW’s X1 xDrive20d Steptronic (R474 860), are slightly cheaper, but in my opinion the GLA arguably has the crossover theme nailed down the best. Look out for a road test in an upcoming issue of CAR. 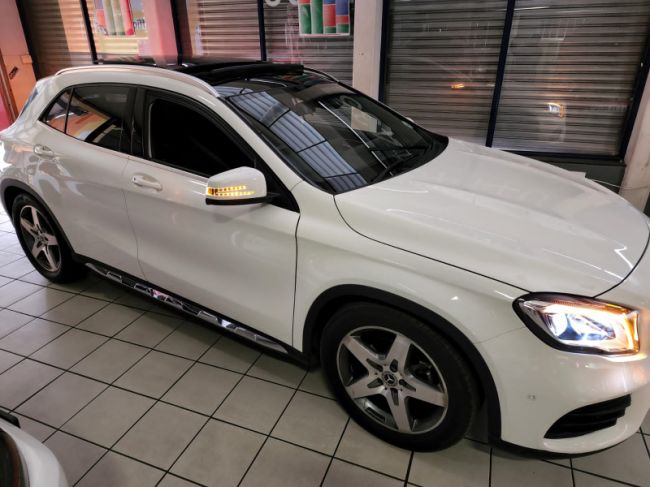