SWAKOPMUND, Namibia – There was very little ambiguity at the South African launch of the revised Land Cruiser Prado range about the typical buyer at whom Toyota targets its large off-roader; the majority of the route consisted of sand, gravel and rocky surfaces. Tar-road driving was there simply to ferry the group of motoring scribes to the next set of off-road challenges. Toyota makes no secret about the fact that the Prado has to cater to boulevardiers and off-roaders alike, in much the same vein as the Land Rover Discovery, Jeep Grand Cherokee and Volkswagen Touareg. This incongruous task isn’t an easy one, and brings with it inevitable compromise, but the Prado manages this better than most.

New for 2014 are redesigned headlamps that jut down either side of the enormous grille and which feature daytime-running lamps, a redesigned front bumper, new rear lamps, alloy-wheel designs (17 inches on the entry-level TX-spec and 18-inch items on the VX) and blind-spot monitoring with warning lamps in the side mirrors on VX models.

Inside, the tweaks have been minor, with climate control instead of manual air-con on the TX, electric seats with seat heating on both models, revised instruments and a subtly updated centre console, a Rocks & Dirt mode for the Multi Terrain Select system on the VX, trailer-sway control and the option of a sunroof on the VX.

The design of the cabin is the Prado’s least successful element. Tactile quality is lacking when it’s compared with the upmarket interiors of the Discovery and Touareg, and a number of the controls feel too budget-car for a vehicle costing from R632 200. However, in terms of build quality, I have no qualms. The vehicles were seriously tested on the launch and except for slight chirps from the luggage doors on some vehicles, there was nary a rattle or squeak.

The Prado is the longest vehicle in its class and legroom front to rear is exceptional (except in the third row, but this same criticism can be levelled at competitors). However, elbow room is less generous, but this narrower aspect does make the Prado easier to thread through traffic and off-road obstacles.

Under the bonnet is either a 202 kW/381 N.m 4,0-litre V6 petrol or 120 kW/400 N.m (between 1 600 and 2 800 r/min) 3,0-litre turbodiesel mated with a five-speed automatic transmission. Neither powertrain is exactly state of the art – the petrol is the nicer of the two but hellishly heavy on fuel – but they should prove robust and the diesel especially is excellent in off-roading conditions.

Dynamically, the Prado also delivers few surprises. It rolls in corners, becomes a touch crashy on rough-road undulations and the steering is as dead as the hundreds of decomposing seals we passed on a extensive beach drive south of Walvis Bay. However, few rivals match its breadth of ability, even if the Prado doesn’t manage the on-/off-road compromise as well as the Disco.

Off-road, it was flawless. If a Prado became stuck in the dunes outside Swakopmund, it had more to do with journo error than vehicular inability.

Pricing-wise, the TX 4,0 V6 starts at R632 200 and the range culminates in the 3,0 Diesel VX with sunroof at R742 400. The latter may appear high for a vehicle that shares its drivetrain with the Hilux, but bolstering the value offering somewhat is a spec sheet as long as those of many luxury vehicles, including sat-nav, an excellent 14-speaker sound system, surround-view cameras and a full complement of safety features. A five-year/90 000 km service plan completes the deal. 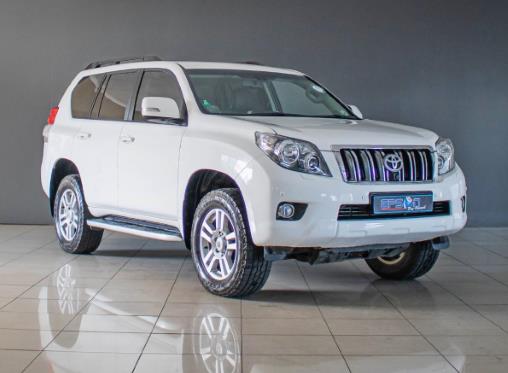