Published by Gareth Dean on May 2, 2011
FordEverest

THERE were bound to be a few resigned sighs when the snarling wedge of Aussie SUV-dom that was the Ford Territory departed our market in 2009 to be replaced by the more rugged, dieselengined Everest range. Then we had to factor in the reality that this replacement was lined up against the dominant player in the bakkie-based SUV market, the Toyota Fortuner, and those sighs began to sound more like pained grimaces. But it would be foolish to bury the Everest before it’s dead. So, during its 12-month stint with CAR, the Everest tackled everything from lengthy daily commutes to load-lugging, offroading and even a celebrity’s fundraising duathlon to see just how practical and robust it is.

Owing to my aversion to all things outdoorsy, much of the Everest’s mileage was accumulated via my daily commute of roughly 60-odd kilometres and the odd jaunt to the Winelands, Hermanus and a 3-hour trip up the West Coast at the behest of my other half. These may not sound like exercises that would cause the figures on the Everest’s odometer to climb steeply, but by virtue of the car’s comfy ride and strong engine, such trips were effortless enough to become regular occurrences.

On the open road the Everest acquitted itself very well as a relaxed cruiser. The 3,0-litre, fourpot turbodiesel does sound rather agricultural at lower speeds, but settles to a more bearable thrum at the national speed limit. Borrowing much of its underpinnings from the company’s Ranger bakkie means that swift changes of direction are obviously not the Everest’s forte – there’s a good deal of play in the steering around the dead centre and a fair bit of dip and wallow from the suspension followed any sudden yanks at the tiller.

Fortunately, the positive action of the long-throw gearshift and easily-modulated clutch made piloting the Everest a breeze. Large bumps also saw that long wheelbase pitching somewhat, but while the ride does have a certain soft/ fl oaty feel to it, it’s not overly disconcerting and makes short work of covering long distances.

Despite constant pressure from friends and family with an odd penchant for tented living in the midst of our near-arctic winter, the Everest continued to evade camping duties. But that’s not to say that the Everest’s time with us was solely devoted to commuting. One of the provisos a friend attached to the avoidance of living in tent city was a jaunt off-road. Although the Everest’s four-wheel drive system is of the old-school “stop and lock into low-range” persuasion, there’s no doubting its ability to see the big Ford amble effortlessly over tough terrain. Although our particular unit lacked a diff-lock, that high ground clearance, good suspension travel and minimal overhangs – and let’s not forget that brawny engine – made traversing rocky stream beds anything but a grimace-inducing affair.

Something as big, brash and chrome-bedecked as the Everest was always going to attract a good deal of attention and our test unit, decked out in one of Ford’s new hues dubbed “Gloaming Silver”, has managed to polarise opinion, with some loving the chunky “American” lines and others being less complimentary. There is, however, no argument regarding the spaciousness of the interior – something that District 9 movie star Vanessa Haywood was quick to point out when her plea for sponsored wheels for the duration of the Big 5 Challenge (mountain and road biking, off- and on-road running and an XTerra duathlon during the Knysna Oyster Festival), in aid of the Starfish Foundation – a charity that does massively important work for South Africa’s aids orphans, went unanswered, and Ford South Africa agreed to let us make our long-term Ford Everest available to her.

Finally, the Everest was set to play the role for which it was created – an adrenaline-fuelled outdoors adventure packed to the gills with bikes and all of the paraphernalia an event like the Big 5 Challenge requires.

Describing herself as “a farm-girl who first learned to drive on a tractor, then graduated to off-road motor-cycles”, Vanessa admitted to being a big fan of double-cab bakkies and their rugged SUV spinoffs. Once the Everest’s third row of seats was dispensed with, the vehicle’s cavernous interior fitted her needs for the Big 5 Challenge perfectly, accommodating plenty of equipment. Despite literally being loaded to the roof, she reported that the Everest proved to be a superb cruiser down to Knysna. The engine also drew plaudits from Vanessa: “Considering its size and the extra weight, I was surprised to find how much power there was underfoot for overtaking situations. There’s certainly no lack of torque. And yet, it was also impressively economical. I averaged around 9,5 litres/100 km, which, considering the load and the fact that I wasn’t exactly on an economy run, was impressive,” she said.

Vanessa thoroughly enjoyed her three weeks on the road with the Everest to the extent that, when asked to rate the vehicle, she said “it deserves a big thumbs-up. It’s spacious, extremely comfortable and also very capable when the going gets rough – I took it offroad for a little 4×4 test in the Knysna forest, and was impressed by the ride and stability.”

There were a couple of reservations, however. Given the Everest’s family/load-lugging/bundu-bashing proviso, the cream-coloured leather interior did have a habit of showing up dirt. Lugging all of that expensive kit about meant security was a concern, and the Everest’s lack of a standard tonneau cover was somewhat worrying.

I brought this up with one of the agents at Porters Auto, who shared my concern, but remarked that Ford currently doesn’t stock this particular item. Perhaps the Everest would have benefi tted from tinted glass for the rear passenger and luggage bay areas. When you have such a cavernous boot at your disposal, it is rather frustrating to take the risk of it being broken into.

What’s more, it would also have been prudent for Ford to fit locking wheel nuts to the rear doormounted spare wheel, which sits proudly, but somewhat unprotected, beneath a silver cover.

Fortunately, the third row of seats are easy to remove – and the hip-high loading lip meant that the vertebra-popping task of loading and unloading umpteen boxes of stuff, destined for storage during the renovations at the girlfriend’s house, was not a relationship endangering exercise.

Because the Everest is a comfy, practical and easy-to-use piece of kit, any minor omissions tend to stand out and frustrate. The most obvious of these is the lack of cruise control – I know that it’s one of those nice-to-have items, but given the car’s aforementioned cruising talent, it’s a feature that would have been greatly welcomed. It also would have been nice to have some audio controls on the steering wheel, but at least the facia-mounted audio controls are large and logical.

In terms of both mechanicals and trim, the Everest didn’t throw us any curve-balls. The old-school nature of the turbodiesel engine did, however, necessitate two services covered by the 5 years/ 90 000 km service plan at Porters Auto in Cape Town at the 10 000 and 20 000 km marks. On both occasions the service was cordial, the car returned spotless and lifts to work given without hesitation – the surprise was that my surname, Dean, being phonetically similar to that of Rowan Atkinson’s bumbling comedic character, was misinterpreted on Ford’s system and I was greeted by a sign outside the service reception saying “Welcome Mr. Bean” – well, you’ve got to have a laugh when taking your car in for a service, eh?

Minor omissions aside, the Everest has a tough, practical honesty about it that one cannot fail to admire. It may not be the first choice that springs to mind when considering the purchase a spacious terrain-tackling family vehicle, but it proved robust and useful enough for us to safely say that it shouldn’t be the last… 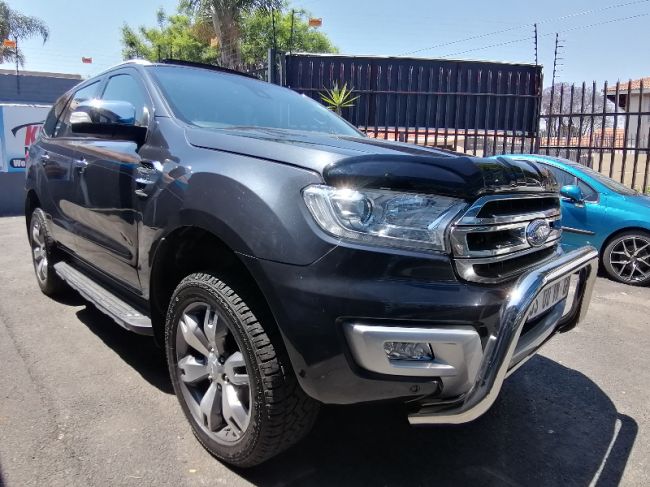 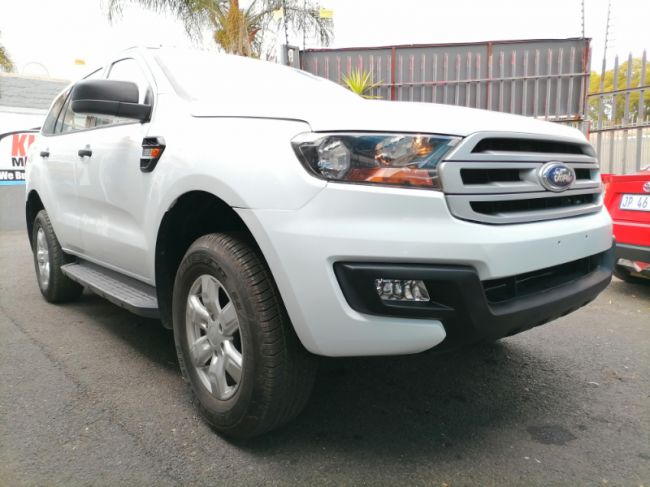 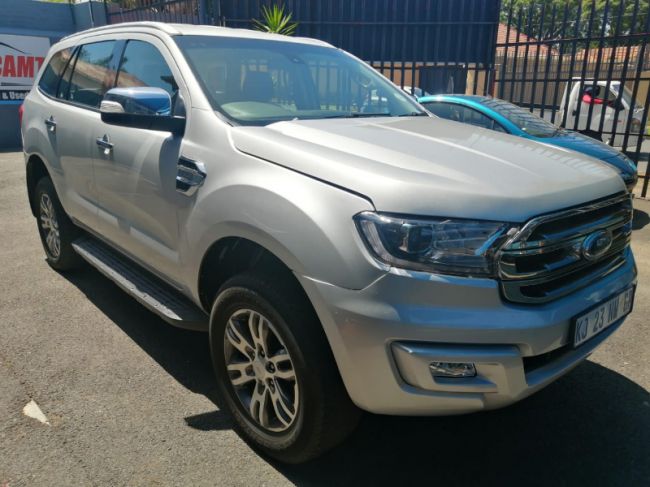 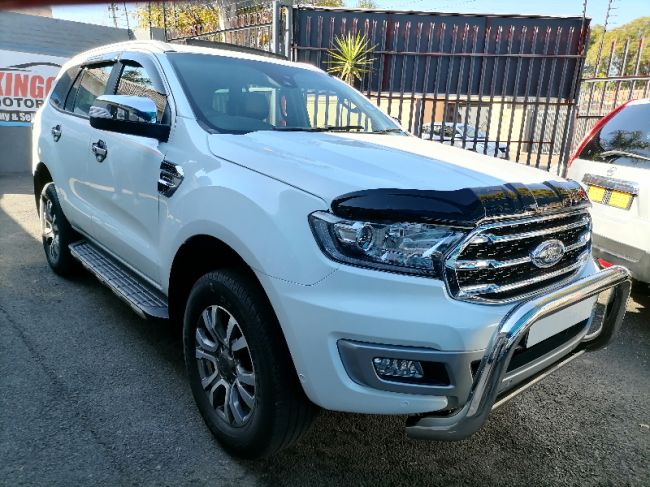