2/6
Compared to rivals with similar power outputs, the WR-V is curiously slow 5/6
The infotainment screen is responsive and easy to navigate. Funky and quirky – an overall great package – powertrain is poor. Yes, I just used a traditional Japanese haiku to sum up my views of Honda’s latest and smallest crossover despite it being a product that comes from India. Close enough, I suppose. After spending three months with this characterful little crossover, there has been a lot that I’ve loved but there were also a few elements that truly irritated me. Let’s start things off with the positives.

Given that this is a product aimed at younger buyers who want their cars to fulfil their active lifestyle, the WR-V doesn’t break a sweat when it comes to traversing gravel surfaces thanks to a generous 173 mm of ground clearance hosted by a less than advanced front MacPherson strut and rear torsion beam suspension. Carting around large items is not an issue for the WR-V either with the signature magic folding seats that grace the cabin with 1 144 dm3 of utility space based on our measurements. This came in handy for the monthly trip to the recycling depot. In certain B-segment hatches, I would require two trips to get all of my waste to the depot. In the WR-V, just one was enough to clear everything out. With a large entryway to the hatch and rear doors that open at almost 90 degrees, loading and off-loading goods can be quick and efficient.

It doesn’t skimp out on storage space either. In the front row, you’ll find a fair amount of large cup holders with special mention of the conveniently placed adjustable one located to the right of the steering wheel. There’s more storage space in the armrest if you want to stow valuable items while on the go. Further emphasising how good the packaging is, the WR-V offers ample headroom for the front row and head- and legroom for the second. Sadly, thanks to COVID-19 travel restrictions, the rear bench was never truly put to the test.

Further elevating the cabin experience is the Elegance’s infotainment screen which I have covered extensively in previous updates. As I mentioned then, it scores points by being responsive, highly customisable and simple to navigate. Points are lost for not including Android Auto.

With a three-month long-term test, it is challenging to comment on the quality of the cabin but with the mileage I covered, I was quite impressed with how well the cabin held up. The interior consists of predominately plastic, yet, squeaks and rattles are notably absent.

It’s quite clear that where the interior is concerned, the Honda WR-V nails a good few crucial requirements that an active-minded owner may require. Unfortunately, the WR-V’s powertrain strongly detracts from this.

Under the bonnet sits the brand’s single overhead cam 16-valve 1 199 cm3 inline-four engine which produces 66 kW and 110 N.m of torque. Together with its 1 098 kg mass, one would think this power figure would be sufficient but it is the complete opposite. Based on test figures we gathered, the WR-V is capable of a tested 0-100 km/h time of just 13,52 seconds. Compared to rivals with similar power outputs, this is curiously slow. Honda hasn’t provided a claimed figure for comparison.

From behind the wheel, the 1,2-litre engine with its i-VTEC system feels sluggish when building up the revs. Five short ratio gears from its manual ‘box are spaced perfectly for urban driving and alleviate this. It’s just a pity the mechanical feel of the shifter is troublesomely stiff, especially when downshifting into first gear which sometimes required me to use all the force in my left arm (which is not a lot in the broader scheme of the human anatomy) to get it into place.

As mentioned in last month’s update, the staggeringly short top gear had a negative effect on the WR-V’s fuel consumption. With more highway driving since last month, the average fuel consumption has shot up to 8,1 L/100 km which is considerably higher than the manufacturer’s claimed figure of 6,4 L/100 km.

If you’re buying this for long-distance trips, my advice would be to think twice. Luggage capacity is not an issue but a fully laden WR-V would offer poor performance which could result in risky overtaking manoeuvres and unsatisfactory fuel consumption. It’s a real pity Honda’s 1,5-litre mill isn’t available in this chassis as that would have alleviated some of these issues based on what we have experienced in this car’s structural donor, the Honda Jazz.

When it comes to dynamics, the WR-V is traditionally Honda. Despite a fairly tall ride, it’s quite sharp on its tyres and a joy to pilot thanks to a light and sharp electronically assisted steering wheel. Body roll is not too noticeable either. With the hard compound xxxxxx equipped for low rolling resistance, there is an absence of grip. However, this is largely unnoticeable as the WR-V is unable to put a significant amount of power down on the tarmac to ever break traction.

As my haiku pointed out, the WR-V is a great product hindered by a lacklustre powertrain which ultimately limits its versatility. It’s a great car to use in the suburbs but once you get on the highway, things get a bit disappointing. The standard convenience features are a huge plus but north of R300 000, the competition in this segment is rather aggressive with the likes of the Mahindra XUV300 1,2T W8 and Suzuki Vitara Brezza 1,5 GLX both arguably better offerings at a lower price point. Once the Nissan Magnide and Toyota Yaris Cross hit local roads, things are only going to get tougher for the WR-V. 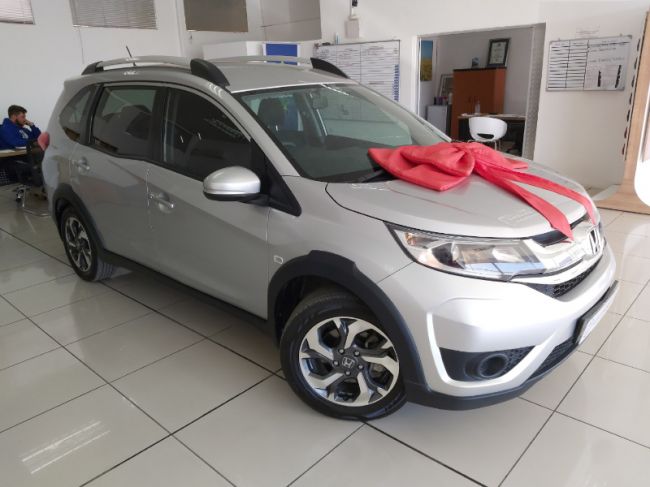