4/6
Downforce has been increased. 5/6
The new Ferrari F8 Tributo has been revealed. The new Ferrari F8 Tributo has been unwrapped, with this latest mid-rear engined sports car effectively replacing the 488 GTB and boasting the most powerful V8 in Prancing Horse history for a non-special series car.

That power comes from an updated version of the familiar turbocharged 3,9-litre V8 (boasting what the firm describes as an “evocative soundtrack”), here generating 530 kW and 770 N.m … the same as the special-series 488 Pista. That’s enough, promises the Prancing Horse brand, for a 2,9-second sprint from standstill to 100 km/h (with the blast to 200 km/h taking a claimed 7,8 seconds). Top speed, meanwhile, comes in at 340 km/h.

The F8 Tributo thus makes more power than the 492 kW 488 GTB, but is also lighter (by some 40 kg) and benefits from a 10 percent improvement in aerodynamic efficiency. Furthermore, the steering wheel rim is smaller to “enhance the level of tactility and make the car feel even more agile”.

A redesigned version of the so-called “S-Duct” up front contributes to increased downforce, while more compact LED headlamps have allowed the vehicle’s designers to incorporate new brake cooling intakes (which means there’s no need for an increase in the size of the braking system to cope with the car’s improved performance). Round back, a new “Lexan” screen features louvres that help extract hot air from the engine compartment, while the spoiler wraps round the taillamps.

Inside, Ferrari says it has retained the “classic, driver-oriented” cockpit look typical of its mid-rear-engined vehicles, but adds that “every element” of the dash, door panels and tunnel has been “completely redesigned”. There’s also the latest-generation Human Machine Interface, complete with a new 7-inch passenger touchscreen display. 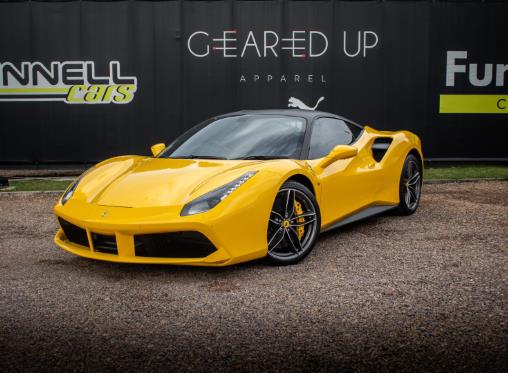