The new Mercedes-AMG GLA45 S has been revealed, employing the same 310 kW four-cylinder heart as the A45 S and CLA45 S.

Yes, the second-generation version of the hottest GLA draws its urge from what is regarded as the most powerful series-produced four-cylinder engine in the world. As with its two aforementioned siblings, the GLA’s turbocharged 2,0-litre engine will be offered in two states of tune.

The standard model delivers 285 kW and 480 N.m (making it more powerful than its forebear), blasting from zero to 100 km/h in claimed 4,4 seconds before topping out at 250 km/h. The S-badged flagship, meanwhile, makes the full-fat 310 kW and 500 N.m, completing the obligatory sprint from standstill to three figures in a claimed 4,3 seconds and running to an electronically limited 270 km/h.

The standard GLA45 features four round tailpipes (each with a diameter of 82 mm) at the rear, while the S model is distinguished by larger, oval 90 mm items featuring internal fluting and “AMG” lettering.

According to Mercedes-Benz, the new GLA45 gains uprated AMG suspension (with a four-link set-up at the rear) that not only improves dynamic ability but also delivers higher levels of comfort compared with the original model. An adaptive damping system (with three modes) is included, too.

In the case of the standard model with 19-inch alloys, braking is taken care of by four-piston fixed front callipers with 350 by 34 mm brake discs up front along with single-piston floating callipers with 330 by 22 mm discs at the rear. The 310 kW S-badged derivative (with 20-inch wheels) boasts even larger discs fore, upgrading to 360 by 36 mm items.

Inside, you’ll find contoured sport seats, red designo seat belts, carbon-fibre-look trim on the facia and the German firm’s MBUX infotainment system (the latter with AMG-specific displays). Yellow highlights feature throughout the cabin of the 310 kW version, along with an AMG performance steering wheel. 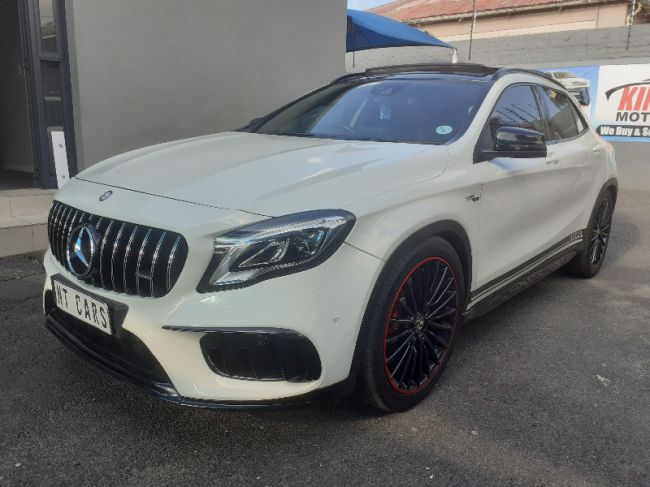