1/6
The Mercedes-Benz ML250 BlueTEC is the most fuel-efficient full-size SUV we’ve tested, but it comes at a price. 2/6
The Mercedes-Benz ML250 BlueTEC's rear three-quarter styling reminded some of the SsangYong Stavic. 3/6
The Mercedes-Benz ML250 BlueTEC's the facia is an ergonomic success. 4/6
The Mercedes-Benz ML250 BlueTEC's luggage area is vast and can be increased to van-like levels by folding the seats. MERCEDES-BENZ was the first German brand to hop onto the luxury-SUV bandwagon when it launched the ML in 1997. And, while the Stuttgart firm may not have been first to market with the concept – that credit is alternately given to Jeep and Range Rover – the ML-Class made hay while Audi, BMW and Porsche readied their contenders in this desirable segment.

The German carmaker recently launched the third generation of its ML-Class in the South African market and the opening salvo of the new range is the protagonist of this test. The Mercedes-Benz ML250 BlueTEC is the smallest-engined and cheapest model in the five-derivative line-up.

Stylistically, the new car’s design is not glaring in execution. View the three generations of ML-Class side by side and it seems as though the W166 fits in between the first and second iterations. The recently replaced W164 has the most angular look of the lot, while the newest car has lines evolved from the first model. One tester commented that there is a good deal of B-Class about the façade. As this is the entry-level model in the range, it comes with 18-inch alloys, which makes the vehicle appear under-tyred in profile.

Extensive work in terms of aerodynamic efficiency has resulted in a class-best drag coefficient of 0,32 Cd; impressive for a vehicle of this ilk.

The substantial exterior dimensions translate into a cavernous interior that is able to swallow a family of five and its oversized luggage. There is room aplenty front and rear, with a capacious storage area, too. With the rear seats in place, there is 384 dm3 of volume for luggage.

Every member of our team, even the resident beanpole, found plenty of head- and legroom. Thanks to a fully adjustable steering wheel and driver’s seat, a suitable driving position is easy to obtain.

The facia is typically Germanic in execution, that is to say ergonomically great but sombre in material and colour choice. Some testers prefer the older ML’s interior treatment.

Our test unit had a few extras that bolstered the premium feel. As standard, there isn’t a glut of specification. Apart from climate control, electrically adjustable front seats, a comprehensive audio system incorporating aux-in and USB ports, and Bluetooth, don’t expect too many toys inside the base model ML. The options list  is extensive.

The Mercedes-Benz ML250 BlueTEC’s party trick is found under the bonnet. Fired up, the four-pot sounds slightly warbly, much like an inline five. The motor displaces 2,1 litres and uses two unequal-size turbochargers in series to develop 150 kW and an impressive 500 N.m between 1 600 and 1 800 r/min. This unit is mated with a seven-speed automatic transmission that drives all four wheels. The combination works well and is very smooth from  start-up all the way through  the rev-range.

The transmission offers three driving modes. In its economy setting, it is quick to select a high gear as soon as possible and can be lethargic on down shifts. In sport mode, it is more alert but at the expense of fuel economy.

Mercedes claims an unprecedented fuel consumption of 6,0 litres/100 km in the combined cycle, which provides a theoretical range of over 1 500 km. A run on our fuel test route netted a more realistic, but still very impressive, 8,1 litres/100 km.

As can be expected of a car that weighs nearly 2,3 tonnes but propelled by 150 kW, performance isn’t sterling. A zero-to-100 km/h dash of 9,19 seconds isn’t necessarily poor but lags behind larger-engined rivals.

In our arduous 10-stop brake-test routine, the large vehicle managed an average time of 3,09 seconds, which is good on our subjective scale.

The ML250’s ride quality is exceptional; it is softly sprung and has a loping gait. Such is the composed nature of the ride that, when driving the ML, you never feel the need to hurry.

This model rides on coil springs – air suspension is optional – and it did not possess any of the optional hardware required to venture off the beaten path, so we didn’t.

Mercedes’s M-class has traditionally fulfilled the dual roles of off-roader and people carrier, with a slant towards the latter, with aplomb. This new car very successfully continues in that vein. We do have a few gripes, though.

The new car doesn’t seem like that much of an improvement on its predecessor, which admittedly was a great vehicle. And, while the emphasis is on fuel economy, this model weighs a great deal for such a small motor to pull.

For those who judge a car first by its badge, then its merits, the ML250 BlueTEC will be just the tonic. However, if the size of your monthly repayment plays a large role in your decision-making matrix, there are more complete options in the market, including Merc’s own ML350 BlueTEC, that have all the plus points of the ML250, and then some. 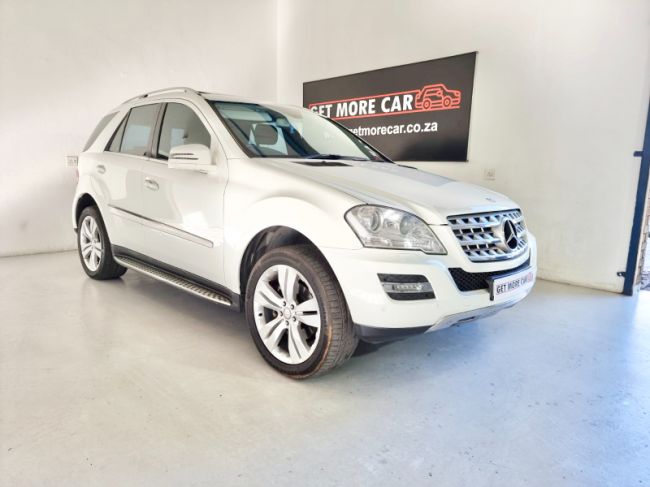