2/10
Aftermarket accessories include a sports bar. 4/10
Exterior badging sets the X350d apart from its four-pot siblings. CAPE TOWN – “Go big or go home”. This saying can be applied to many aspects of life … but now also to the double-cab bakkie segment in South Africa. The reason? The local launch of the highly anticipated, V6-powered Mercedes-Benz X350d, which becomes the most expensive and most powerful bakkie currently available on our shores. But is it worth its almost R1-million asking price?

By now, you’ll surely know the X-Class is based on the Nissan Navara, a decision Daimler took to cut development costs, shorten the time to market and tap into the Japanese manufacture’s expertise when it comes to this type of vehicle. Although Mercedes tweaked several elements, including the chassis and suspension set-up, the use of Nissan powertrains in the X220d and X250d models was seemingly frowned upon by the aficionados of the premium brand. Now they can relax as the X350d has a proper Mercedes-Benz heart.

And it’s not only the 190 kW, 3,0-litre V6 turbodiesel that comes from the German manufacturer’s stable, but also the permanent four-wheel drive 4Matic system (sporting three differentials; one on each axle and a centre unit). The powerhouse of an engine delivers its 550 N.m to all four wheels via a seven-speed automatic gearbox with low range. We had the chance to experience the X350d off the beaten track early during the day of the drive.

While not many owners would likely subject their million-rand bakkie to a grade 5 off-road course, the way the X350d handled the fairly mild challenges on the day suggested it was capable of far more. The smooth torque delivery of the engine combined with the traction afforded by the 4Matic system (even with road-biased Continental tyres) meant conquering steep inclines was a cinch. The centre and rear diff locks plus the off-road drive mode meant that axle twisters did not halt progress either. In short, this is a proper 4×4.

That said, most of the driving was on the sort of open, flowing tar roads where most examples of the X-Class will probably spend their time. The cabin is well insulated from road-noise and that engine makes sticking to the speed limit (especially in sport mode) a problem (top speed is a claimed 205 km/h). The claimed 0-100 km/h time of 7,9 seconds indicates that overtaking punch is readily available. Not bad for a bakkie…

However, the ride is something of a mixed bag as the body-on-chassis design with solid rear axle (employing coil springs) means “shimmy” is continuously present except on billiard-smooth surfaces. In the commercial segment, the X-Class is certainly one of the front-runners when it comes to comfort but the asking price forces a comparison with luxury SUVs against which it cannot compete. The hydraulic steering, although direct, is a tad heavy and doesn’t help to hide the almost 2,3-tonne kerb weight of the vehicle. In short, the engine can get you into the sort of trouble the chassis is not capable of getting you out of … so it’s best to take care when pushing on.

There is not a lot to differentiate the X350d from its four-cylinder siblings, bar the large “V6 Turbo” logos affixed to its flanks. Two different spec levels (Progression and Power) are offered, dictating wheel design and size as well as the extent of the exterior chrome accenting. Inside, some of the materials used feel slightly cheap to the touch and there is unfortunately no reach adjustment on the steering column. The start button, meanwhile, is still hidden to the right of the steering wheel at knee level. However, despite these irks, the cabin is mostly able to convey a sense of occasion, particularly when compared with other offerings in the segment.

Should I buy one?

Okay, let’s address the elephant in the room: another German bakkie in the form of the Volkswagen Amarok V6 (which starts at “only” R720 000). Objectively, the Mercedes is not R200 000 better than the VW, but it is has a “star” up its sleeve – that large emblem on the front grille. Ultimately, the X-Class is the only premium-badged bakkie on the market and that alone may be enough to convince certain well-heeled folk to part with their money. At least with that V6 under its bonnet, the X-Class now has the firepower to back up the bold purchase statement… 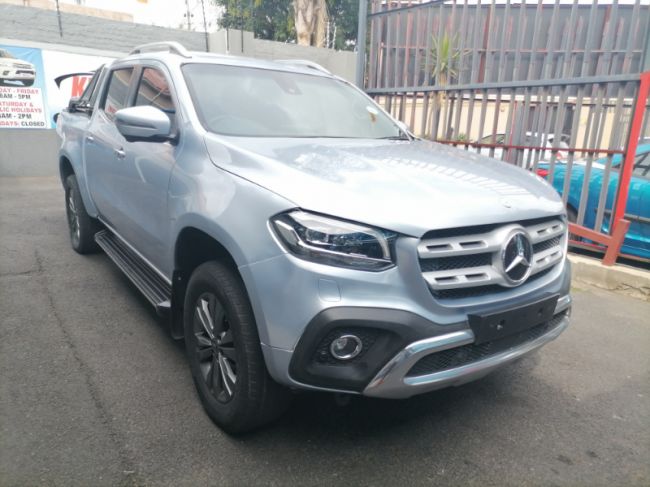